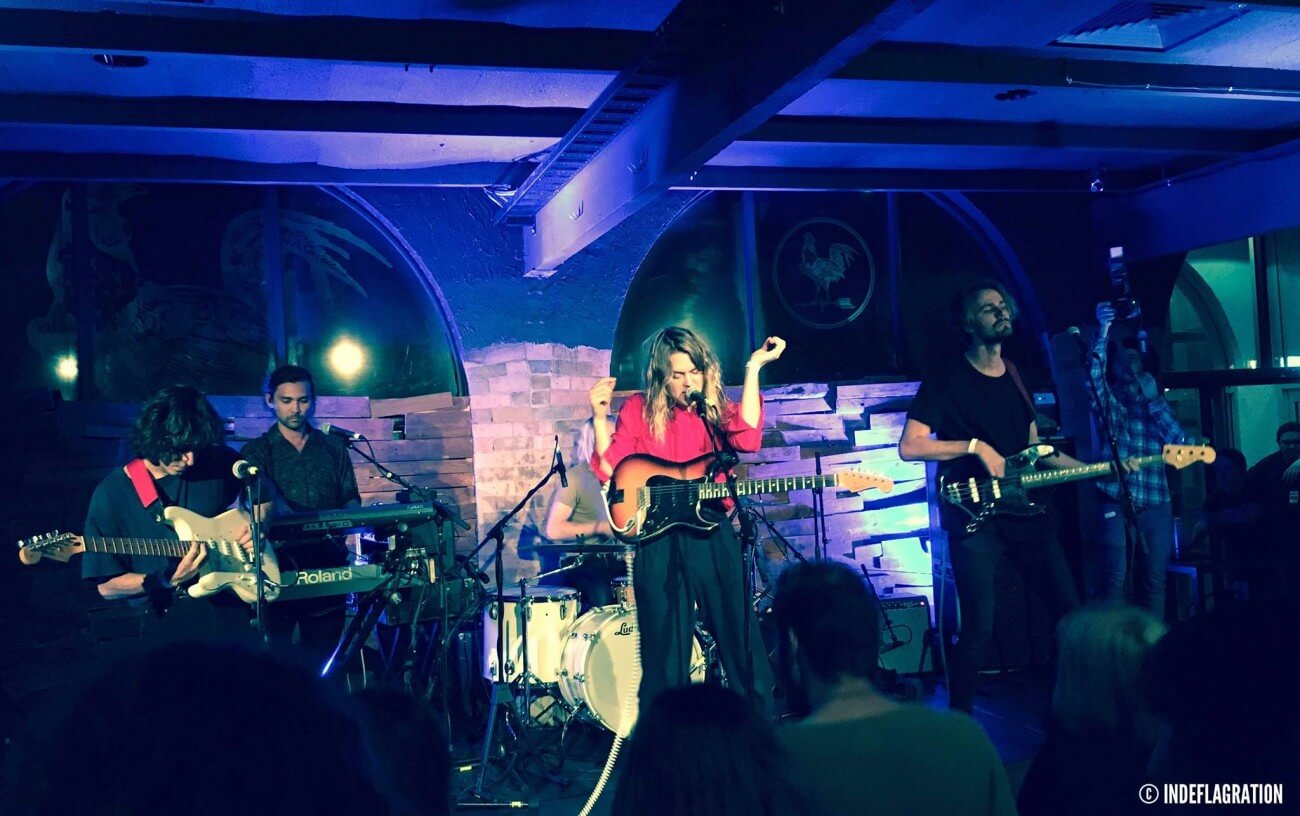 They set the Valley venues on fire, seduced the audience with their voices, musical prowess or deep sense of melody and… They all made their way through our top 6 gigs of the 15th edition of the Bigsound Festival!

The Belligerents, Olympia, Tigertown, Vera Blue, Alex Lahey, Flowertruck… Those names surely do not a ring a bell to you yet. But you will definitely hear more about these 6 Aussie artists and bands in the following years.

With no contest, The Brisbane-based band The Belligerents (photo) accomplished the greatest stage performance of this Bigsound Festival 2016. With two 30-minutes gigs at The Flying Cock – during the Mushroom Opening Party on the 6th and on the 8th – they made people dance like hell, making it difficult for other artists to keep up with their madness and energy.

Lowis is probably one of the craziest lead singers you have ever seen on stage – as his clothing works can attest -, and his incredible voice is not less crazy. He distorts it in every direction and succeeds by this means in conveying a synth-psych-electro ambiance to a very rock musical performance. With the discreet on stage but vital Andy on the synthetiser, The Belligerents’ leader stands the comparison with no one else than Kevin Parker from Tame Impala.

The Belligerent’s music is thus at the crossing of Tame Impala‘s psych-pop and colder and more noisy-rock Deerhunter, that already made a tremendous impression on us when we saw them in San Francisco (article in French). Make sure to note their name in your mind or small notebook – doesn’t anyone have a music discoveries notebook? – and be sure of one thing: you will hear from them in the future. Or the past. Or whatever time capsule.

→ Listen to their last release Before, I Am (March 2016)
→ Their Facebook page

Figure a blonde goddess, playing the lead guitar on the path of David Gilmour, with a thrilling voice and dressed as if she had just stolen Bowie’s 70s clothes. Now you know who Olivia Bartley aka Olympia is.

On stage at the Ric’s Big Backyard, Olympia stands definitely as our best discovery of the 2nd night of official Bigsound (September 8th). An amazing energy fostered by the magnetic charisma of Olivia Bartley and her undeniable talent.

The band ended with the great Smoke Signals, in a live version that completely overpasses the studio version. An achievement in itself and a way for you to figure how great their performance was.

→ Listen to their last release Self Talk (2016)
→ Their Facebook page

The greatest live performance of Bigsound 2016 1st night (the day after the opening party) was for sure Tigertown’s performance at the Ric’s Big Backyard. Like Olympia, the band was very charismatic and incredibly dressed. But in disco-style. My bad.

The Aussie band played songs with intensity, in a real crescendo, slowly convincing the audience that they were watching a great show.

With Lonely Cities as their final song, Tigertown made just EVERYBODY dance and sing the chorus. I personally danced and sang a lot too much, totally forgetting my existence.

Everybody was so thrilled that we called the band back for another tune. Something really uncommon at Bigsound, and the only time we have – personally – seen this happen this year! Add Lonely Cities to your current playlist to start the day the best way possible.

→ Listen to their latest EP Lonely Cities (2016)
→ Their Facebook page

When we heard the first song that Sydney-based band Flowertruck played at Bigsound Closing Party at The Triffid, we immediately thought about a time period – the end of the 1970s – and a country – the UK –. Punk rock, cold wave, mods… A whole era revived with tunes like I Wanna Be With You and Sunshower but also with the way the musicians were dressed. T-Shirt in the pants. So British rebellion.

It’s not a coincidence if Courtney Barnett and Alex Lahey are Australian. Their rock songs with a touch of nonchalance are about things and thoughts of life in the country and that is certainly why both of their songs directly speak to young Aussie people… And also to the rest of the English-speaking world!

We can assert that it is the only gig we saw in which people actually knew the lyrics of the songs. Ivy League, Let’s Go Out have definitely the potential – thanks to great songwriting and rock spirit – to be international hits in the next months, and it is certainly what they are going to be!

All we can wish to Alex Lahey is the same international success as Courtney Barnett. Going to SXSW 2017 is certainly a good start for that!

Vera Blue was one of the headliners of the Bigsound Festival 2016, notably thanks to her hit Papercuts with rapper Illy. But we had underestimated how her other tunes were powerful and her voice thrilling.

Vera Blue’s gig at The Flying Cock on Wednesday was a total success. The audience were there in large numbers and the great vibes filled the place. Approved.

All our Bigsound 2016 discoveries are in this (now updated) playlist

All the artists we saw at Bigsound Festival 2016 :