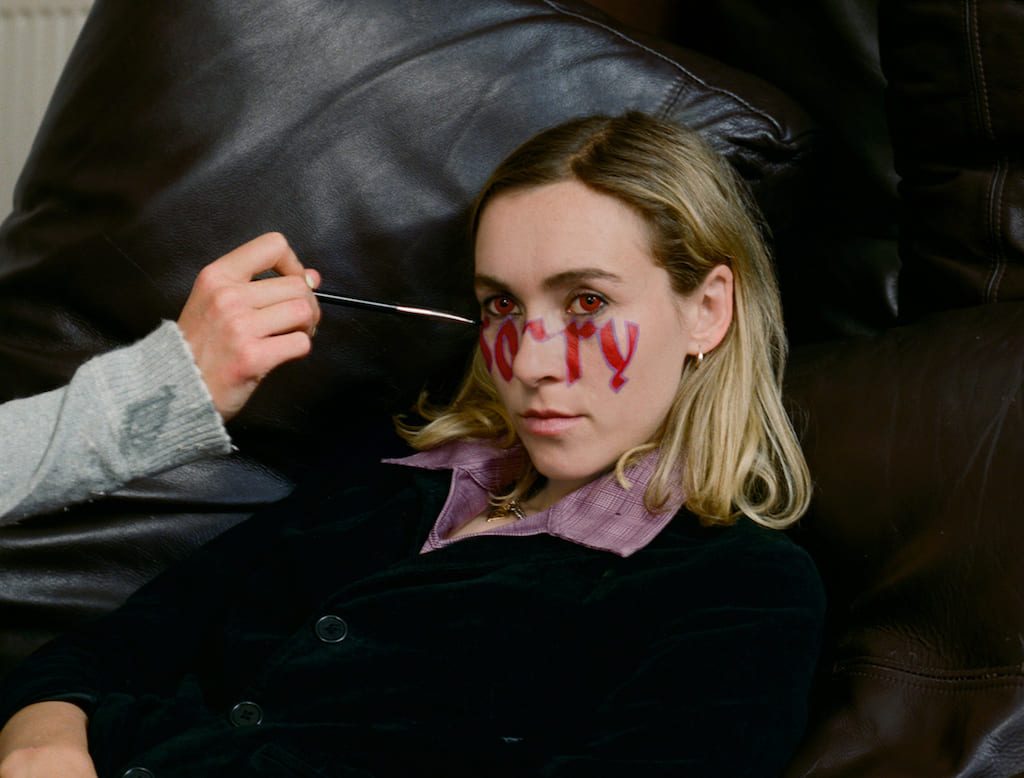 We had a chance to chat with Asha Laurenz, lead singer of the British band Sorry, ahead of the release of their new album Anywhere But Here, on October 7th

Confessions, teasings and smoking fags on stage—here’s everything you want to know about Sorry, alongside some new tracks to put in your favorite playlist.

“We wanted to make our album sound like live“

Hello Asha! How are you?

Excited to finally tour properly for both albums?

Is it your first time here?

No, we had a few gigs there already. I think one of my favorite gigs ever was in Paris, actually. We played the Pitchfork Festival four years ago, at Supersonic, on Halloween. It was really fun!

Asking before the new tour—so far, what would be your best moment that you remember living on stage?

Oh I’ve had some… We played this festival in Sweden, I think? Like last month, it was very fun. Plus we were allowed to smoke on stage, that was quite exciting. I can’t think of any older ones right now, but the first time smoking on stage was really fun, yeah.

I’ve listened to your new album Anything But Here last night, and I couldn’t help but noticing it sounds a bit more stripped than the first one, 925, and than the TWIXTUSTWAIN EP which is much closer to what we can listen on theHome Demo/ns. Are there any reasons for that?

Yes, I think we kind of wanted to make it sound a bit more live, like a good merge of live and post-production style, and we obviously wanted it to sound different from the first record as well. So we kind of tried to strip back the songs and build them more around lyrics and style rather than just production.

How was the album born then? I know some singles were already a part of your setlists back in 2020 on your live record [‘There’s So Many People That Want To Be Loved’ and ‘I Miss The Fool’ were present on Sorry’s limited bandcamp release A Night at the Brixton in 2020 – and I’m lucky enough to have a copy of it].

Oh yeah! We played this gig during lockdown, it was very weird, there was this limit to like five people per table and we just played in front of them…

Now for the album, Covid probably had a small part in it, but it’s more like the way relationships had carried on after the first album, just like observations on love… I think it’s just general life, really. I can’t really pinpoint how exactly it started.

The EP you released last year isn’t really related to it then is it?

The EP was more like a kind of little electronic thing really, we had that single we knew we could call a single and had a few songs around it that we thought would work, so that’s kind of like this side thing we had. We knew the album was coming and we thought that would just be a nice thing to put out in the meantime.

Did you have any artistic influences that helped the writing of this album?

Yeah, again I can’t pinpoint exactly for you the people but I was listening to a lot of Andi Numan, Stevie Moore, Daniel Johnston… That kind of classic songs, but also a lot of pop songs and other music. It’s really hard to know where these things come from but yeah I was definitely listening to a lot of 70s music.

Let’s go for a question a bit more concrete, though it’s a hard one: which song would be, for you, the most representative of the album?

Oh, nice. It is one of my favorites from this album. The ending lyrics are quite beautifully made. I’ve actually received the lyrics before the album, and I tried reading them before listening to it which I usually don’t do. One striking thing is that they would do pretty solid poems.

The ending of ‘Tell Me’, or obviously the chorus of ‘There’s So Many People That Want To Be Loved’. Would you say poetry is an important part of the writing process?

Oh yeah I like poetry, but I think it’s more like a result of reading a lot of literature, constantly. I used to read a lot of poetry during lockdown, trying to learn them by heart, just to like get different voices and people. I think it’s very interesting to read the same person quite a lot, to see how they change; their forms and stuff in different books, just like, when you read something for a while and get in the flow of it, and it gets into your internal monologue… Yeah. Again, I can’t pinpoint it clearly but yeah it’s important.

Do you have a favorite author right now?

Yeah, I’m reading a lot of Carlo Rovelli. It’s more like, non-fiction physics books but written in a very poetic way. It gets people who don’t know about physics to get interested in it. It kind of just relates to nature as well which is quite beautiful.

I’ll definitely have a look at that! Now back to Sorry; how is a Sorry song written? Is it still the same process you’ve had since your debuts?

I think it’s the same generally. Sometimes we’ll just have like that one lyric idea and do a song around that, or we won’t have any lyrics and we’ll play something, and even just the sound of that, it might be just a sample, will influence the whole song and then it might be built from there; or I’ll have the song ready and we’ll change it right after some discussions… It just really depends on the song. They’re all very different in that way.

How do you know the song is finished?

It’s hard to say. I think it’s just a feeling we have from there. But like for the first record, it was always very hard to change it because we’d record it and it was on the computer; but for this one we’d finish the song on the computer, like the demos, and then we’d play it live and it kind of helped having the forms changing, and we’d try to play them in a lot of forms which I think kind of helped expanding the songs.

So you recorded the entire album live?

Oh that’s quite mighty. Rare thing to do these days.

Yeah… It’s nice to have it sound different.

I’ve also spent most of my night watching your videoclips. How important is it for you to have your own universe? It seems important for you since you try to illustrate most of your songs yourself.

I think it’s important for everyone! We kind of started doing that and it’s a very fun thing to do. But we also have the images sort of being conjured up a lot when we’re writing the songs, or we play them. It’s quite nice to put the images into video, and people can start seeing it and assume it in a way. Even just like certain colours or movements and recording scenes together. I also think it’s much harder doing that than like making weird trashy videos that no one really gets, or just making videos for yourself…

That’s why I was asking; you’ve even created an entire production company [FLASHA prod.] to do your videos yourself.

Well again I think it’s just fun to do. I really love movies as well and it’s basically my best mate Flo, and we’re all friends so it’s just a very nice project to have together. Especially since we see things the same way.

Was the project created only for Sorry or do you reckon you’d like to go further with it?

Oh no we did some videos for other people but we don’t really do it. Maybe in the future! But so far it’s just a thing we like to do for fun.

Which video would be the one you’re most proud of?

Do you have any plans to do another one then?

Yeah I think we will, but after the album. We’ll release a little 12 songs thing underneath the album, hidden somewhere. Like a Home Demo/ns 3. That would be around if you find it. Will be within the album.

We used to have that recurring question at Indeflagration about any new great bands you’d like to recommend?

I do have a few! I’m really into Bryan Destiny, he’s got that really cool EP, especially his song ‘Feed the Horse’. There’s also Teeth Machine, they’re friends, which is very cool. I also listen to Wu-Lu, and this very nice band called Wunderhorse.

That goes straight to our playlist! I think that’s all I wanted to ask you, so I wish you good luck for your album release and will see you in Paris the 15th!

Alright, wicked! Cheers, see you there!