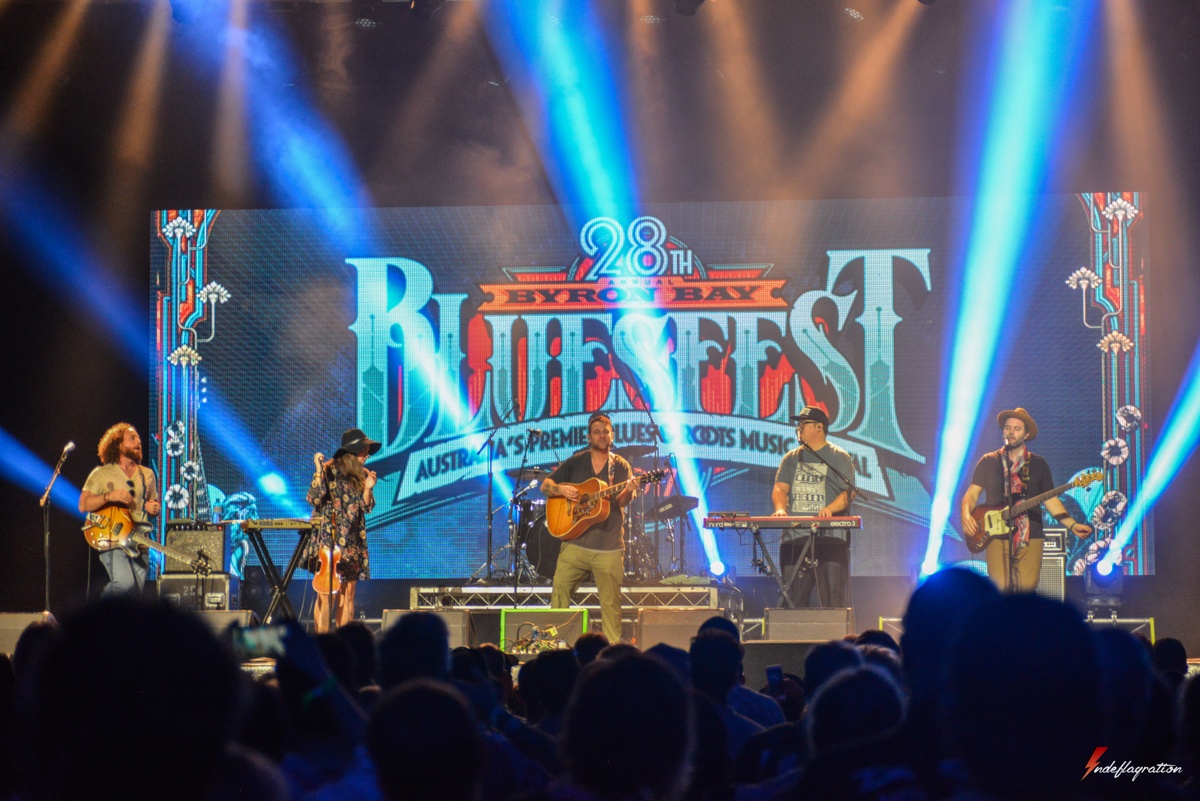 Byron Bay Bluesfest is certainly one of the most praised festivals in Australia. For its 28th edition – apparently the last one held in Byron Bay – it gathered artists from various countries and styles. With a common point: the influence of blues, its roots, and the guitar. Patti Smith, Courtney Barnett, Vintage Trouble, Nikki Hill, The Strumbellas, NAS… The artists of this 1st day of festival were more than appealing.

Nevertheless, while the coherence of the different gigs could appear as obvious sometimes, the organizers took the freedom to bring variations. Not only blues, but rock. Not only rock, but pop. Not only pop but hip hop. Here is a selection of the most impressive acts of this 1st day of Byron Bay Bluesfest 2017, in an attempt to demonstrate this consistent diversity.

We had heard Spirits on all the radio channels back in France during the spring and summer of 2016, and really liked their latest album Hope. So we were curious to see The Strumbellas live for the first time at Byron Bay Bluesfest.

And we were not disappointed. With their melodies in line with The Lumineers and Passenger, their folk instruments playing in harmony and a feeling of happiness that never left their set, they totally convinced the audience that they deserved to be here, among all those stars of the previous century. The voice of Simon Ward is always on the verge of being off-tune. But it’s definitely not, and it gives a peculiar identity to The Strumbellas.

The Canadians ended up their set with Wild Sun with the audience singing along. A great performance to start our evening at Byron Bay Bluesfest.

The soul of Vintage Trouble and Nikki Hill

Watching Vintage Trouble live performance at Byron Bay Bluesfest, you could think that they were playing for decades. First, their music sounds like a heritage to blues, soul and rock’n’roll from the 1960s-1970s. One listening to Nobody Told Me is sufficient to get that impression. Second, they owned the stage like rockstars. The singer Ty Taylor even kept singing while crowdsurfing during at least three whole minutes.

You would be surprised to learn that the group was formed not later than in… 2010!

With already multiple hits – you for sure have already heard Run Like The River -, Vintage Trouble unearth the best from the 20th century’s musical currents: guitar distorsions, blues riffs, rhythm, groove… Impossible not to dance or at least move in every direction when listening to Blues Hand Me Down. Ty Taylor is so full of energy, charisma and his voice is so powerful that we felt transported directly into the 1970s.

In the same way, Nikki Hill appears as the new gal in an old business. The music is definitely rock’n’roll, with a touch of garage rock and her voice completely soul. It is really difficult to acknowledge that Nikki Hill has started her career in the 2010s when we listen to (Let Me Tell You ‘Bout) LUV, but also when we see how she looks moves.

Representing the past in the present, Nikki Hill is the incarnation of Byron Bay Bluesfest success: associating vintage stars to ‘rookies’ showing respect to music from the past while giving their own touch to it.

Courtney Barnett was the first Australian artist we really came to know when we arrived in Australia in July 2016. We were late then, since she was already a superstar here. Going through her discography, we realized we loved everything.

Seeing her live at Byron Bay Bluesfest was thus a dream come true. Accompanied on stage only by her faithful bassist and drummer – herself playing the guitar -, Courtney Barnett played all her greatest tunes. And by that, we mean all of them. Because all of them are great (in case you still had not understood).

Courtney Barnett tells stories in her songs. Stories of the day-to-day life with an indefinite point of view that is so close to what the majority of young people have in mind. Should I care or should I let it go? Almost all Courtney Barnett’s songs relate to that way to embrace things.

The definitely rock Pedestrian At Best – exploring behind the scenes of success -, the mellow Depreston – thoughts on a house during a real estate visit to buy it -, Elevator Operator – just listen to it -, our favourite Kim’s Caravan (review in French) – about environment destruction – and Nobody Really Cares If You Don’t Go To The Party stand out are must-listen.

Courtney Barnett played a very rock performance, close to perfection. If only it could have lasted longer… The heavy rule of 1 hour-sets in festivals is still hard to digest. But what is also great with this rule, is that you can sometimes see different artists in an awesome transition. Going from Courtney Barnett to Patti Smith was one of those. 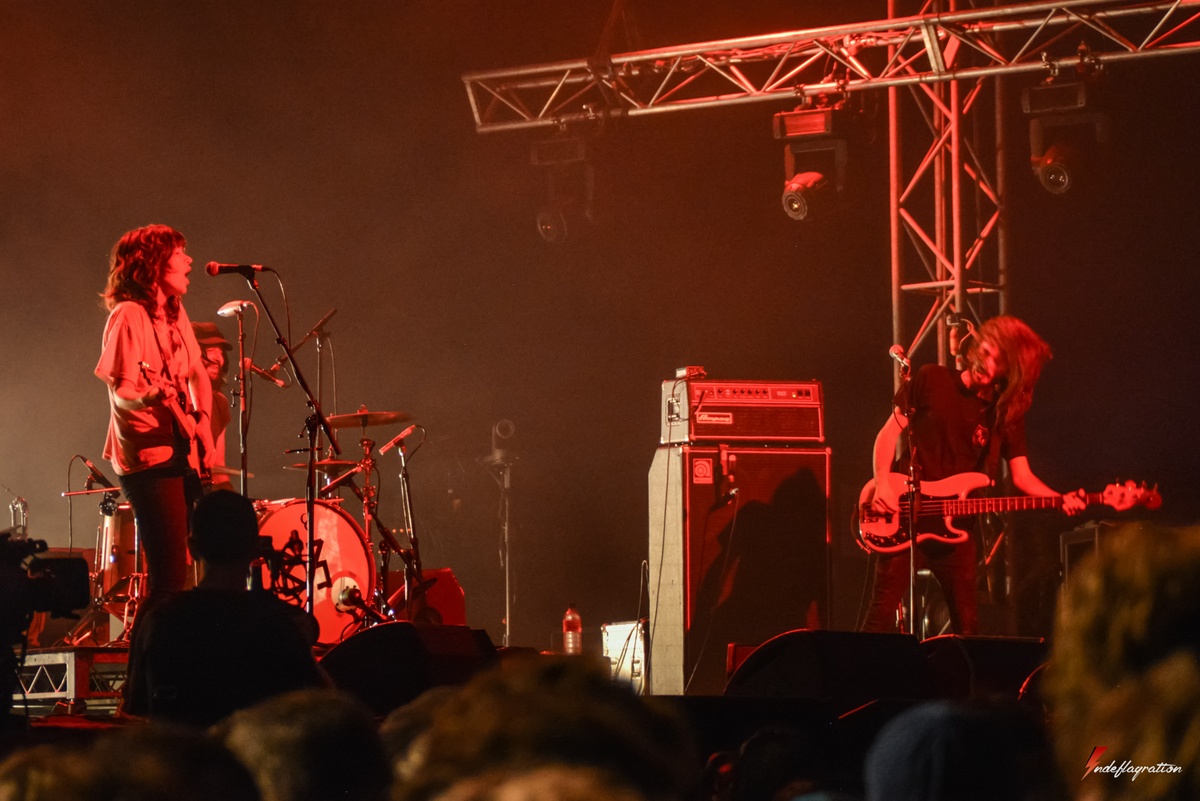 And here comes Patti Smith, the priestess of rock. We were not huge fans of her debut album Horses, which was released 40 years ago. Of course we knew and appreciated Gloria, the prowess Birdland, the instrumental composition of the tunes and the undescribably unique voice of Patti Smith. However, young Patti Smith resorted a lot on her nasal high-pitched voice, that tended to become unbearable after 3-4 tunes and made her stop listening to the album.

But 40 years have passed. And what stood as the most magical discovery of this 2017 Byron Bay Bluesfest is the acknowledgment that Patti Smith’s voice has changed. But not in the same direction as all the other retro artists that are already well in their sixties. Indeed, Patti Smith’s voice was not only astonishingly recognizable but also incredibly better. No more high-pitched nasal unbearable notes, but a power that comes from the deep. Her singing was both impressive and incredibly emotional. The lyrics stood out even better, acting as a sign that the purpose of the album is not out-fashioned at all.

Although the whole performance was delightful, some particular tunes kept playing in our heads as we took our way back to Brisbane: Birdland of course, but also the reggae-influenced Redondo Beach, Free Money and its beautiful piano intro.

People Have The Power she said. Patti Smith definitely has it. She owned the place and ended her performance as the queen of the day at Byron Bay Bluesfest.

All the photos from Byron Bay Bluesfest 2017 – 1st day 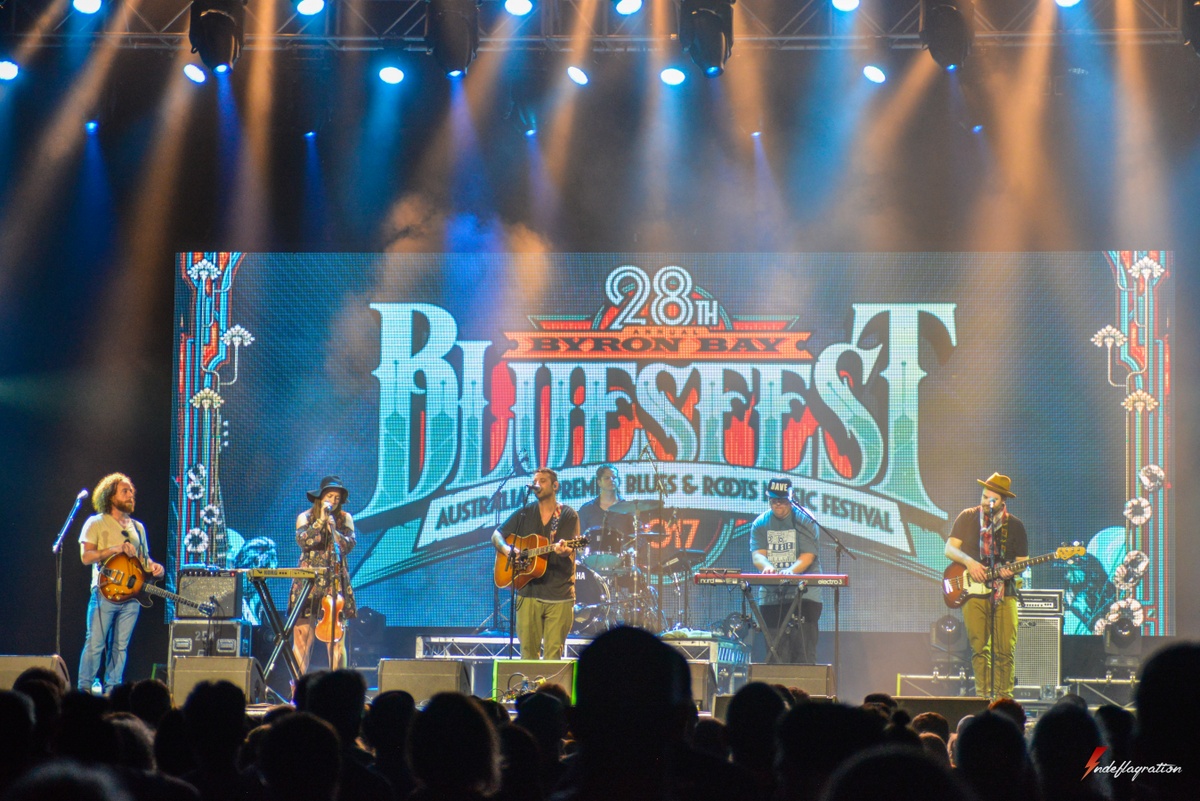 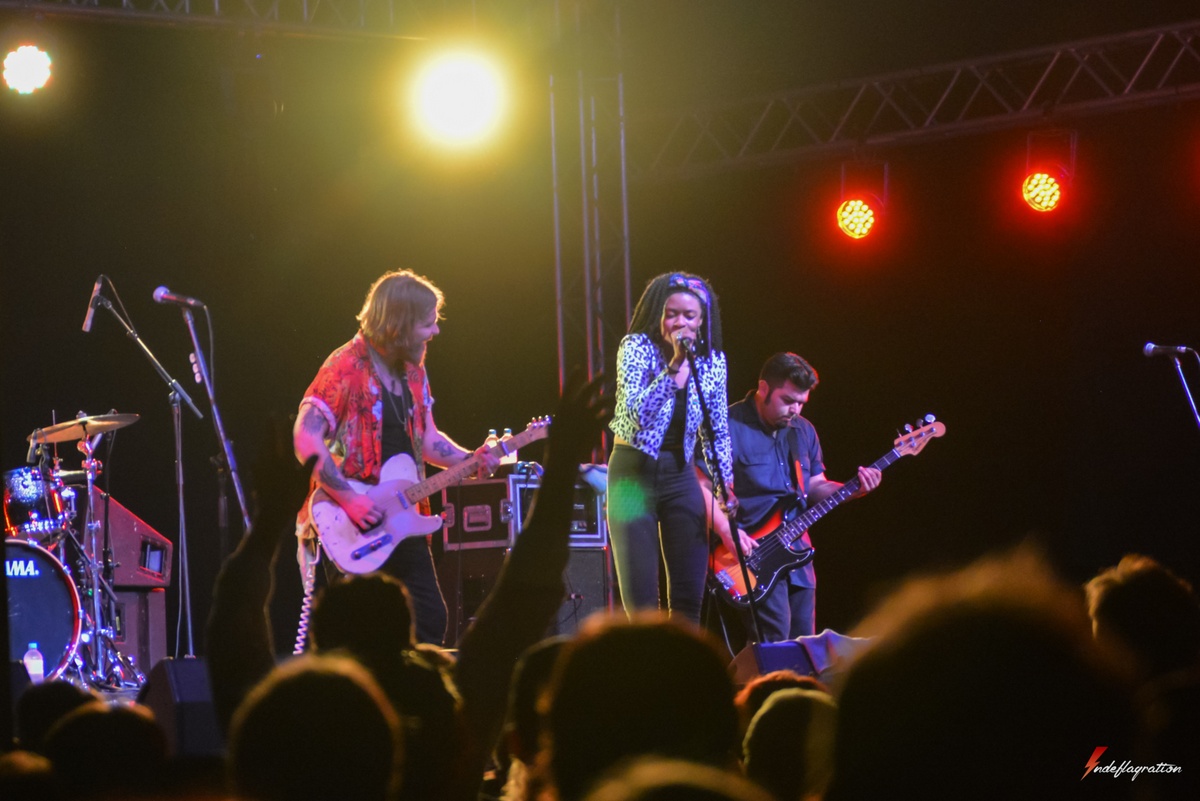 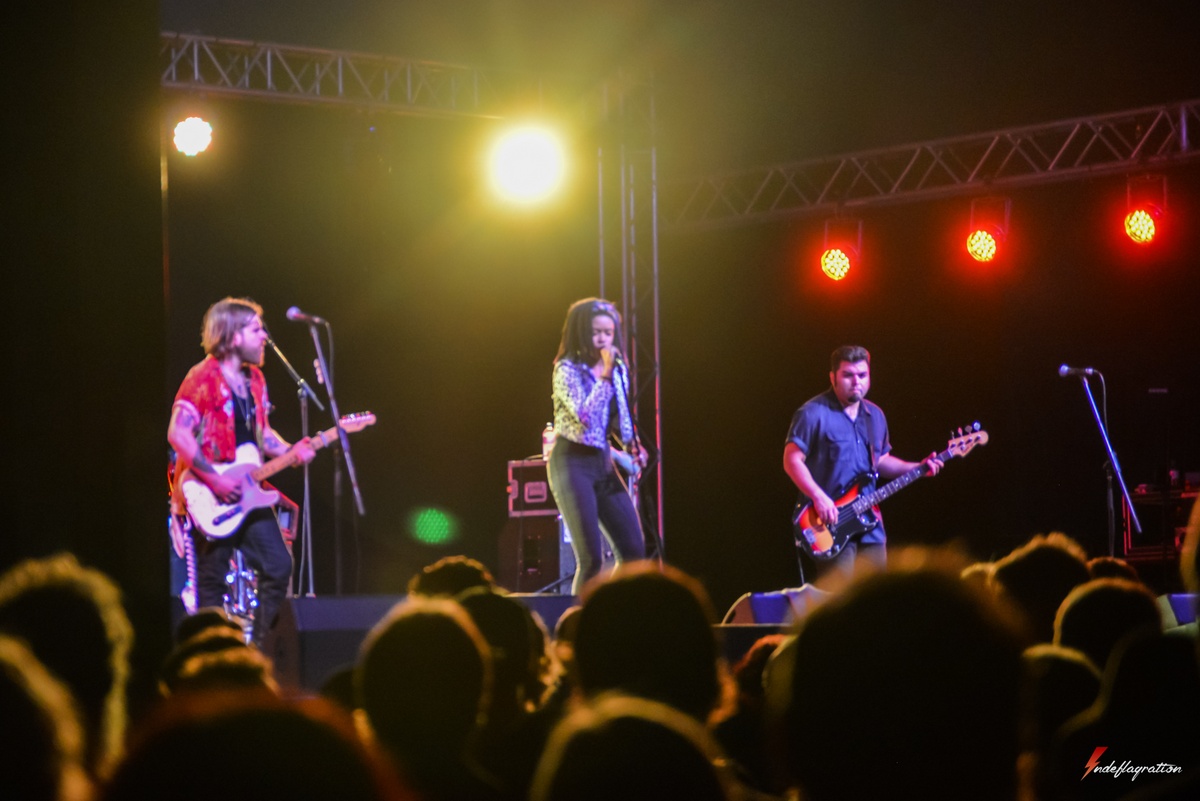 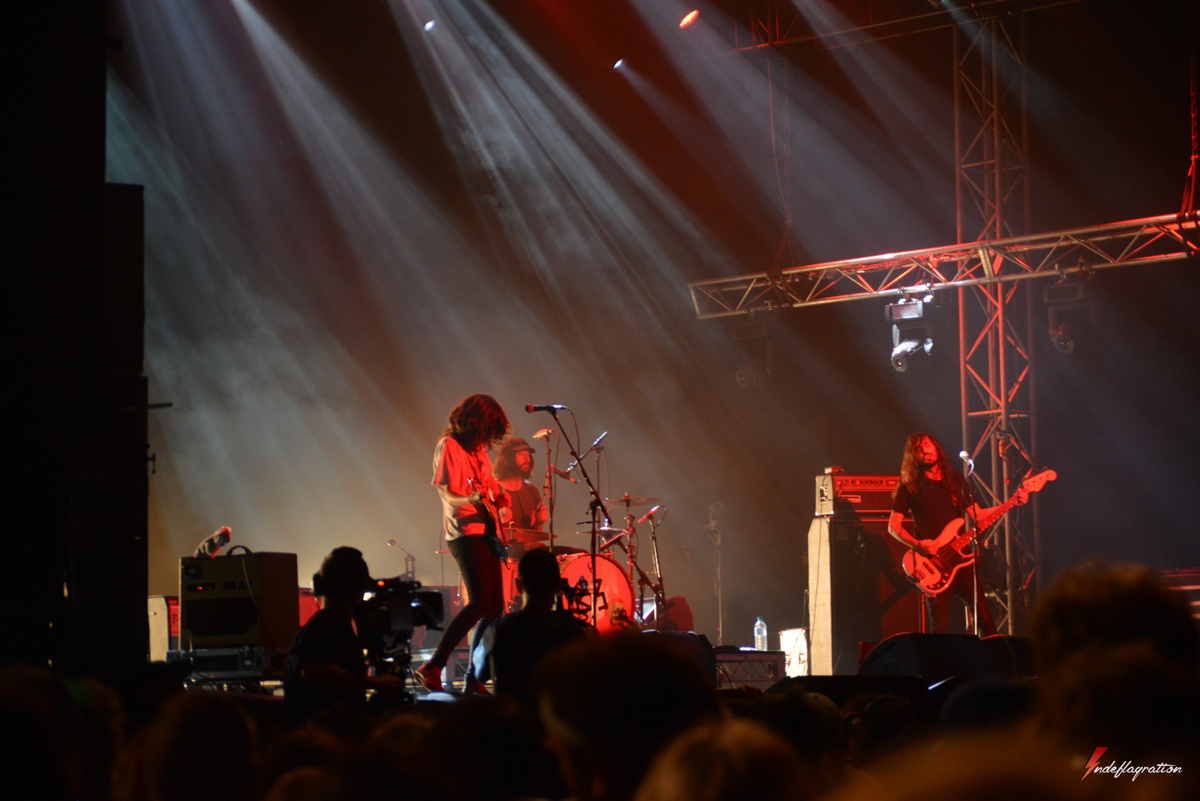 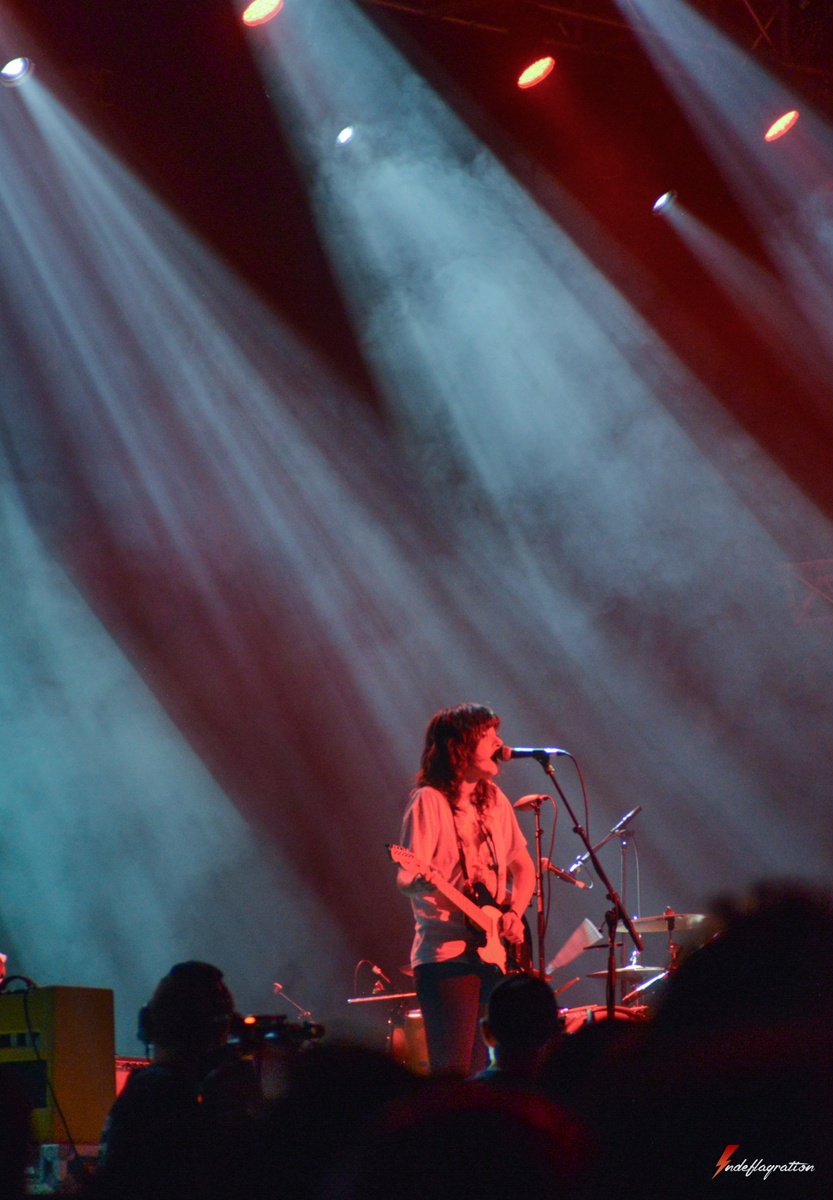 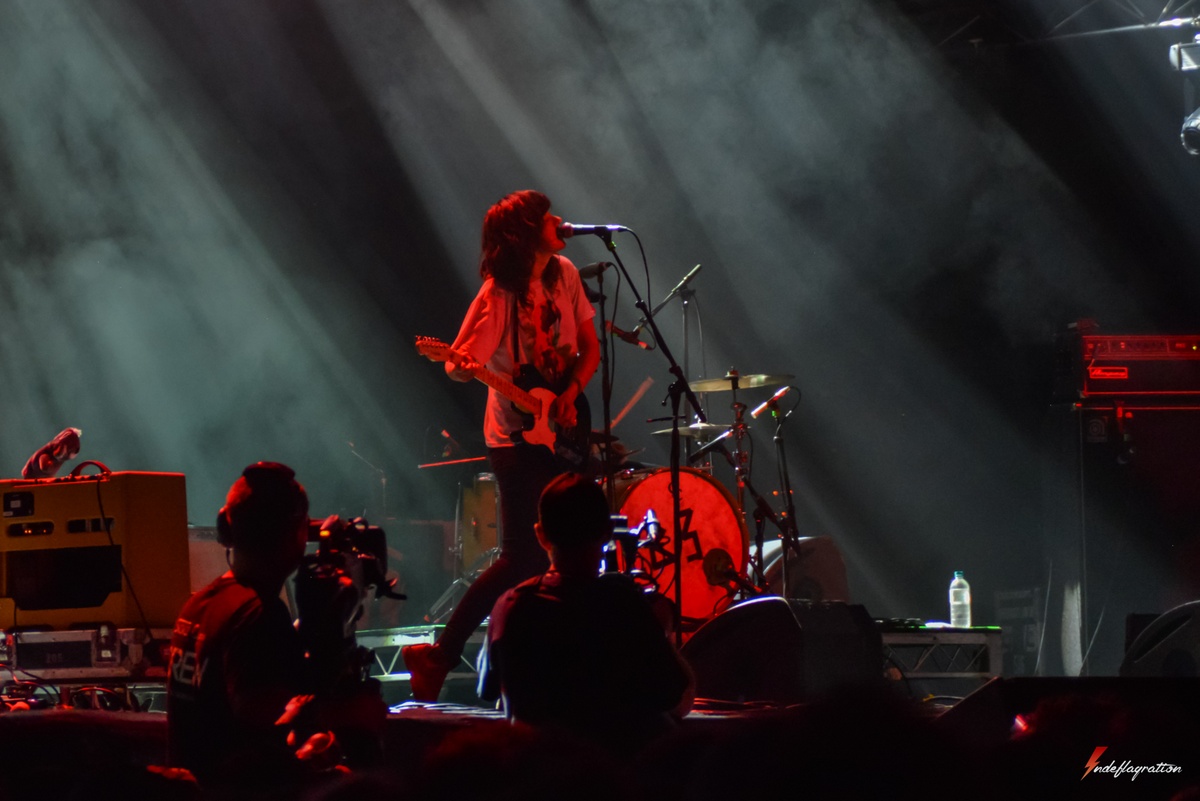 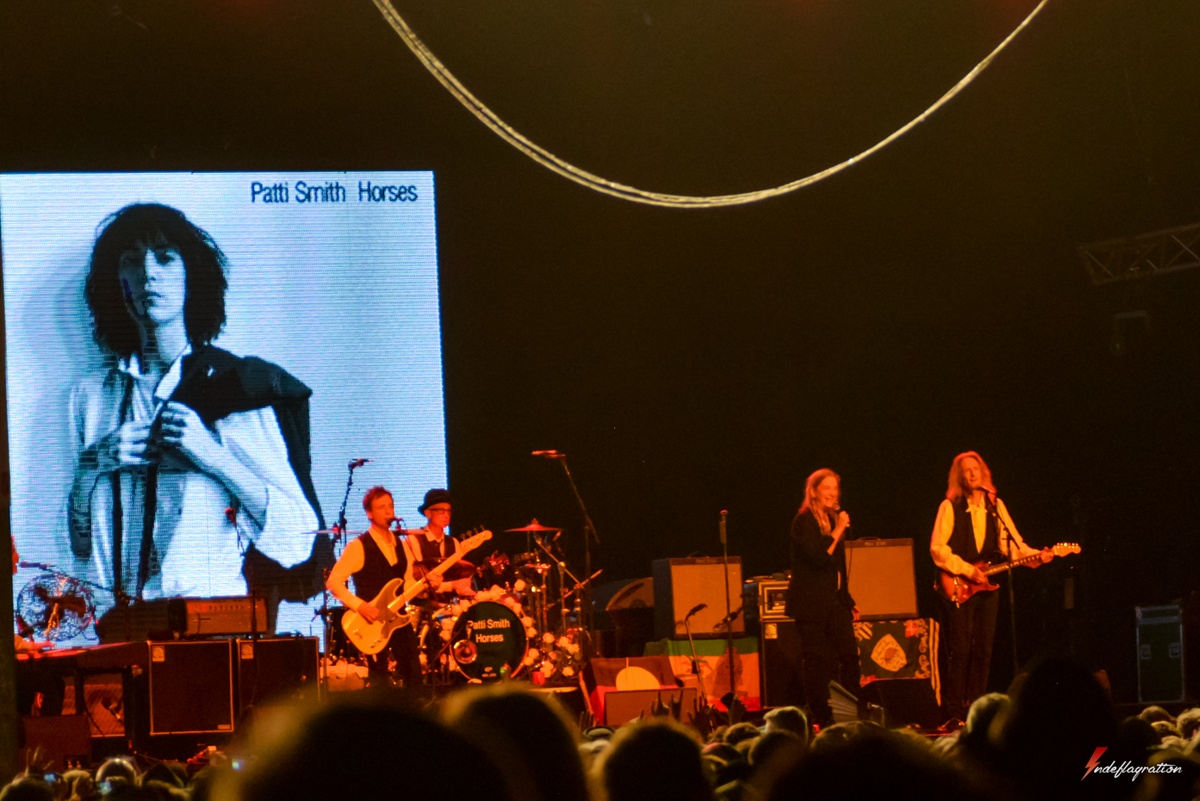 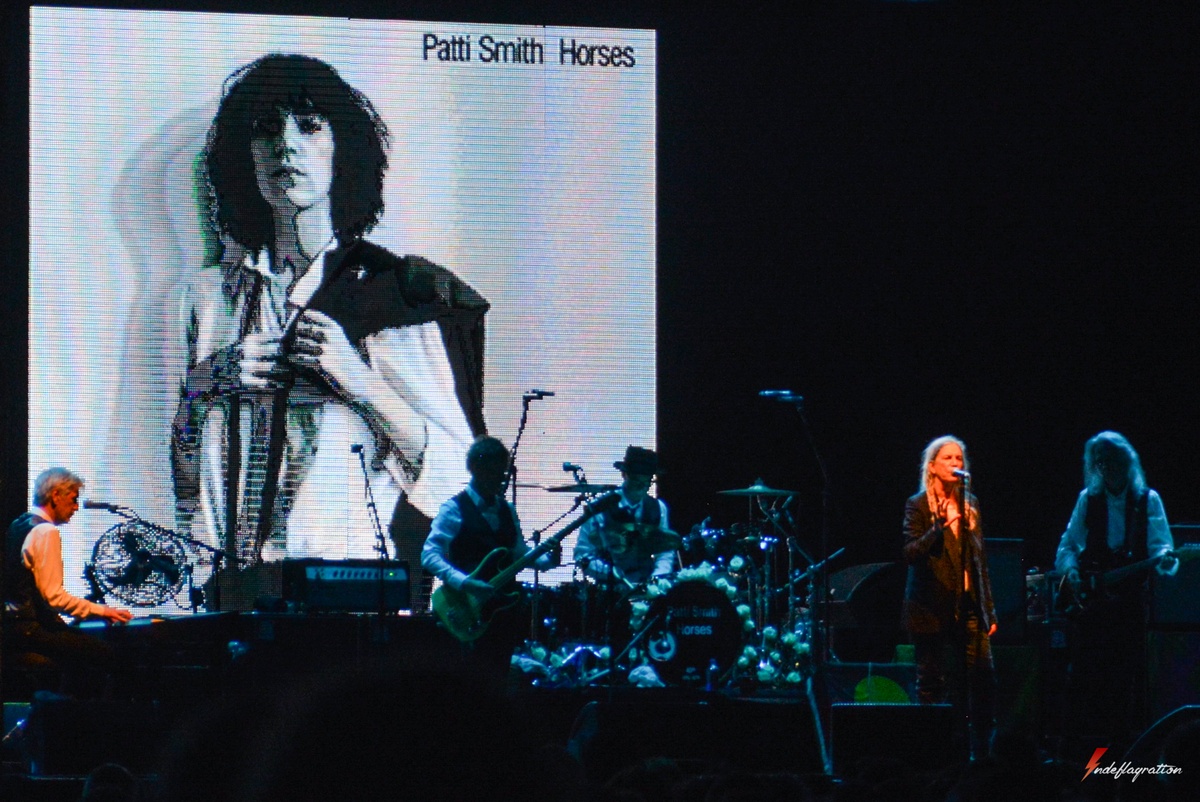 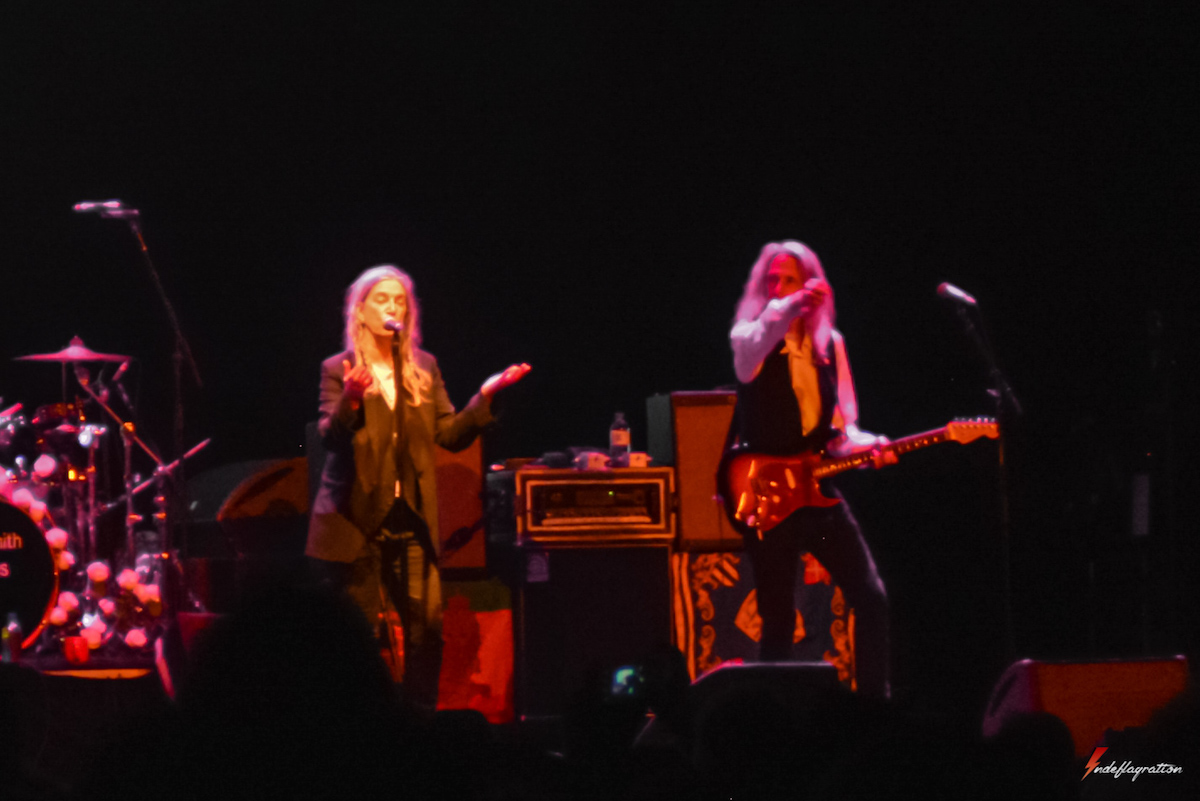 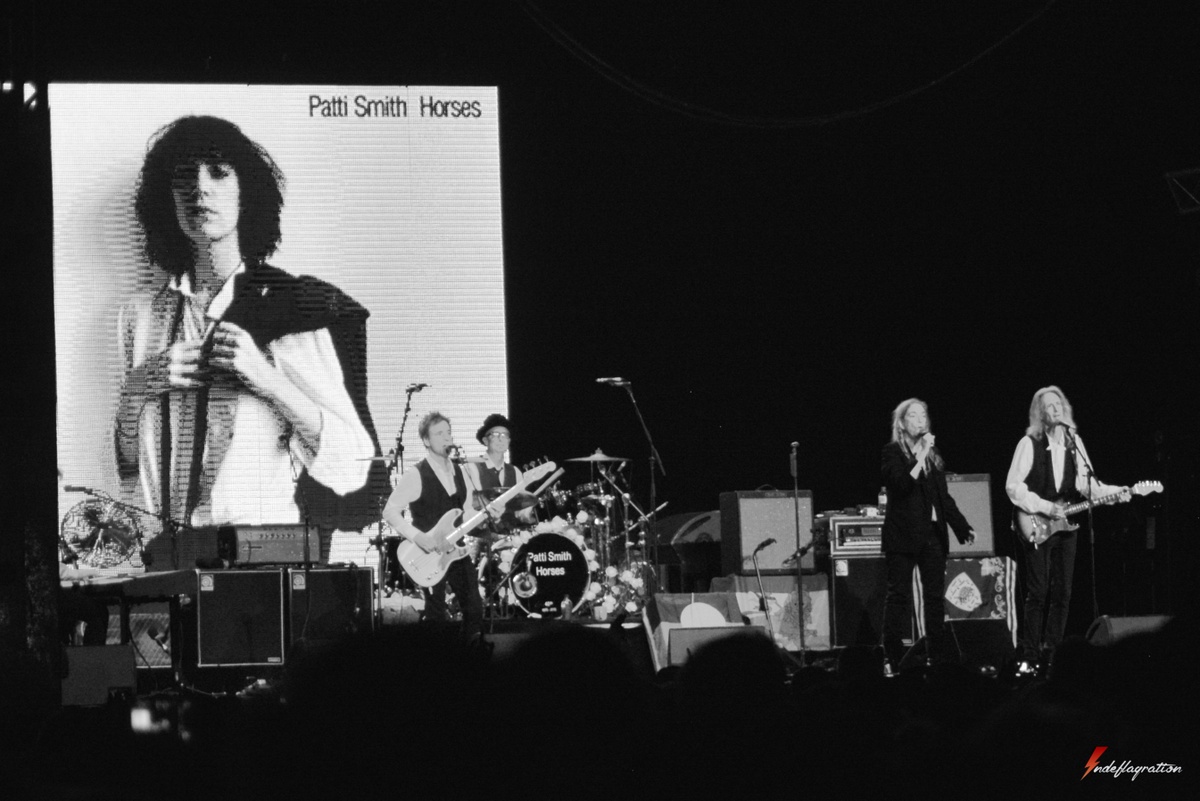