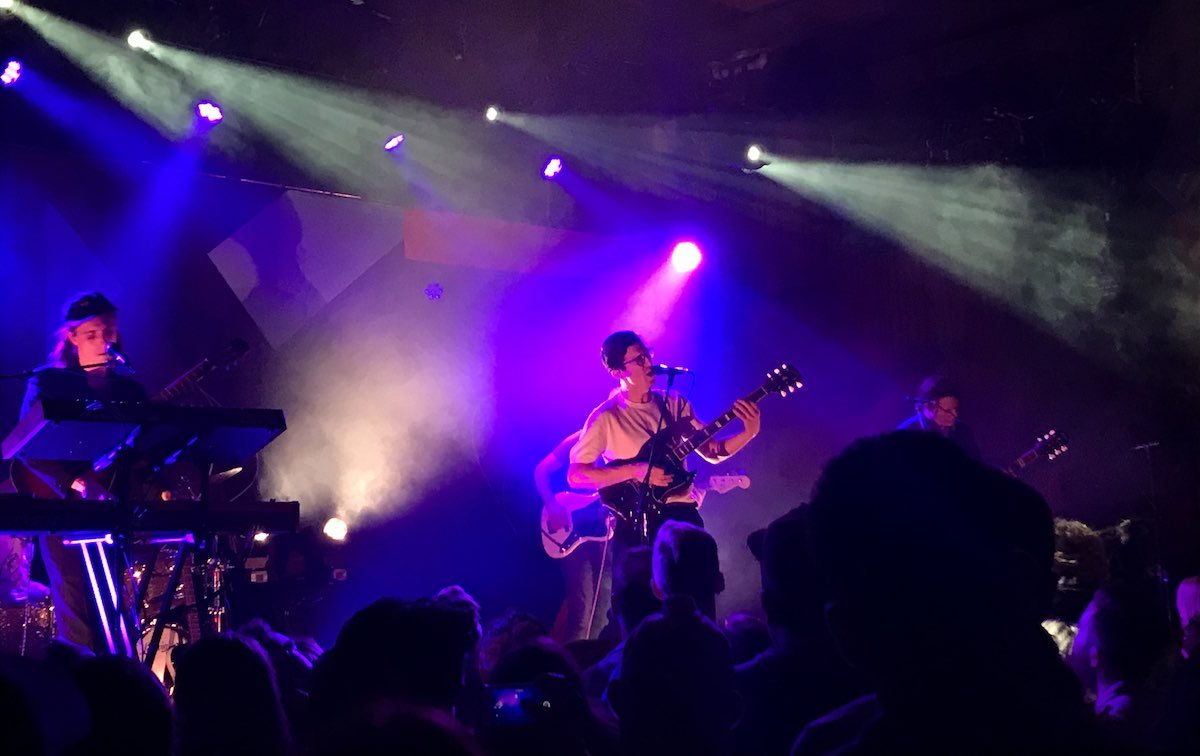 For my first gig at The Independent in San Francisco on September 22nd, I was happily alone as I often enjoy to be. I expected a lot from Dan Croll‘s performance but could not anticipate the awesomeness – yeah, really – of the opening band The Dig.

The Independent is The Dig site

As I passed through the entrance corridor of The Independent, I could already feel the presence of history: a furry atmosphere as typical to SF as The Fillmore is, pictures of legendary bands covering the slightly enlightened red walls… It was already too much for my dear heart.

The Dig had already started their gig. The high-pitched voices of Emile Mosseri – also on the bass – and David Baldwin – also on the guitar – were matching each other like chopsticks with sushis. I had the weird sensation to hear The Shins revamped with more synth and sound innovations. Closer to Broken Bells then… Anyway, it was incredibly refreshing. After having listened to the studio versions I can also say it was much more ‘rock’.

I’m just kidding of course. I was lucky enough to witness the rise of The Dig, who definitely won me over on Simple Love, a song apparently dedicated to the city of San Francisco. On the last tune, Dan Croll’s drummer joined the band on stage, and the two drums performing at the same time closed this opening show perfectly.

I had only one true regret: not having jumped in the Uber earlier to see The Dig’s complete set!

Dan Croll has got everything

I had discovered Dan Croll when his song Away From Today was all over Triple J in Australia last year. I remember hearing it for the first time and feeling the immediate need to get on Shazam even though I was driving. I almost crashed the car, but succeeded in my task.

3 guitars, 1 bass et 1 drumset on stage. Is it a rock performance? Didn’t expect it to be but it sounds good! For “the biggest show of their US tour”, Dan Croll made a great performance. Maybe he says that in every American venue he toured, but whatever.

Perfect harmonies, a hell of a voice navigating through different registers of voice, some tempo breaks and big riffs on the guitar… There was everything I could possibly imagine and even more!

Dan Croll and his band opened on the 4 year-old Compliment Your Soul, kept on with Away From Today and One Of Us and it was on!

What struck me most was how all the melodies were built with crazy precision, complex structures, breaks, counter-times, and yet felt simple. The audience totally fell under the British charm of Dan Croll, helped by the amazing sound quality in the venue.

I admit I enjoyed almost all the tunes played that night (17!), and especially 24 (“Hey, I wanna feel the same”), the groovy Sometimes When I’m Lonely, the funny Educate and the hit Tokyo to close the show. The solo reminded me of Pink Floyd High Hopes-period, the same depth of the drums and a haunting piano…

Finally, Dan Croll can become the next king of pop-rock. Let’s just give him time, attention, and more occasions to demonstrate his talent.

The complete setlist of Dan Croll gig at The Independent