Interview – Jordan Klassen : “I quit my rock’n’roll band and picked an acoustic guitar” 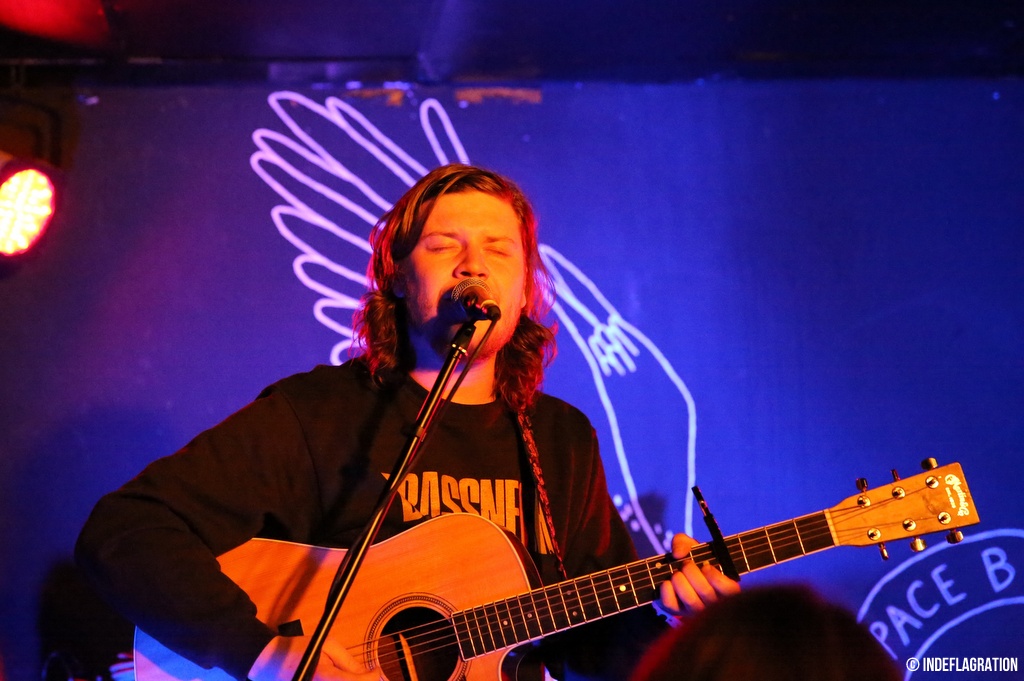 Hi Jordan! First of all, the 2 songs you’ve just played: Baby Moses and No Salesman, what do they talk about?

Baby Moses is kind of me looking back at my twenties…

Sorry but how old are you actually?

I just turned 30. For me my twenties were very tumultuous and chaotic. So I just kind of tried to put the pieces together of a lot of revenge that happened. So Baby Moses it’s kind of me looking-back and doing like:

That’s kind of the film. But instead I felt like just a baby moses, this kind of floating, baby down a river in the basket, you know…

So yes, that’s the idea behind Baby Moses song.

No Salesman was written about a relationship that failed. I tried to reflect the emotions we feel all the time: “I see all this problems… but I love you more than the problems” and at the end of the song I said “maybe I don’t love you maybe I just want to you …”. But usually people don’t interpret this song that way, they just think it’s kind of a love song.

Do you have favourite songs on the album, some of which you are really proud of?

I really like the opening track called Glory B, I just feel it’s very different of everything i’ve done. Yes, I’m proud of it.

Do you have artists that inspired you a lot? Maybe Canadian artists?

Yes some Canadian artists … there’s a guy called Patrick Watson that I like a lot.

I think Sufjan Stevens is a reference I get a lot too. I mean I do really like his stuff too. And then for this album I think I was also listening to a lot of eighties, ethereal music, I’ve been listening a lot to Peter Gabriel. There’s also a band named Cocteau Twins, it’s kind of weird [laughs] but I like them.

Have you always played folk songs?

I grew up playing pop, rock’n’roll and indie pop. Then I played in a rock band in my twenties. I think this is kind of everyone does, but they’re like quit their rock’n’roll band and they’re picking an acoustic guitar.

Do you prefer to play in solo?

I feel I connect more with an audience when I’m playing solo. I can change things on a fly, with a band it’s much more sat. But with a band it’s more dynamic, more fun… which is also great! So, yeah, it’s very different. They are 2 completely worlds different in my mind.

When you’re playing on tour every night, do you also play music during the day for instance?

Oh yes! I have been more playing this tour. I recently signed to a really amazing publisher in America [Nevado Music]. I write for them and try to write also for film and television. I’ve been trying to write everyday yeah, also on tour. Sometimes I’m too lazy and tired [laughs] but yeah I do as much as I can.

Do you take inspiration from the place where you are?

Oh yeah, I think so. Actually, when I was in Spain, we hade some sunny days and I was very inspired. I think the weather comes by with the place. In England it was very rainy, and grey and dark and I wasn’t writing as much [laughs].

So, for Jordan Klassen to write a song, it has to be sunny !

[Laughs] Yeah ! Definitely, my inspiration depends on the weather.

When you made Javelin, were you in search for something different in your music? How did you start with it?

I think I started with a few rules for myself… I have always really loved ethereal music, with a lot of reverb and kind of cinematic. I just wanted to dive in that. I feel like I have always restrained that in the past. But this time I really wanted to be ethereal.

I wanted to use the acoustic guitar less, which I did for sure. I also just wanted to reflect on some of the music I grew up in and listening to a lot like Anya Marina or Peter Gabriel … That was approximately the vision that I had.

Do you play all the instruments ?

I play everything except the strings.

On stage, do you always play the guitar ?

Yes, I always play the guitar on stage, and the ukulele also.

And when you are with a band, do you like to switch instruments, just like Sufjan Stevens does ?

I’m not as technically professional as Sufjan Stevens [laughs] But I do play the piano on stage sometimes!

I just think I have happened to have gone through a lot of shitty things this last ten years, but not … I know I’m very privileged, I’m a white middle class man in Canada. There was a dark time in my life, but I feel like I have a lot more joy now and I feel like I’m writing just as much if not more.

It’s not really music related but what do you think of Justin Trudeau?

I’m quite cynical about politics in general, especially Canadian politics. I think there’s a huge divide between the right and the left, in the West in general. I have hope that Trudeau could help bridge some of those divides, because there are lots of parties in Canada. And I mean… he’s a good-looking guy! I have hope that things could be good. And I also think that people get really excited about something and I hear them!

We’ll see. I think he’s done a great job as far as presenting himself. Now, we’re going to see how things actually change in Canada because we had a very concerned government before, which wrecked a lot a things …

Yeah. Who doesn’t? That’s like when people ask me: “do you like Paris?”. I really like them a lot, they’re kind of Indie Rock Gods in Canada.

In all the world maybe! Is there one stage or one festival you really want to do one day?

I have always had this goal, there is this big theatre in Vancouver called The Orpheum, which is actually where I saw Sufjan Stevens played. I’d love to play there one day. I like large theatres in general, I think my music is more for theatre than bar or club.

Are you very influenced by the place where you play? Like big stage or whatever.

There is energy from the audience, there is the way the lighting is, the size of stage, the sound obviously… My impression of a show will always depend on all those things.