Home IndeflagIn Australia The Jezabels in interview, “an amazing adventure”

The Jezabels in interview, “an amazing adventure” 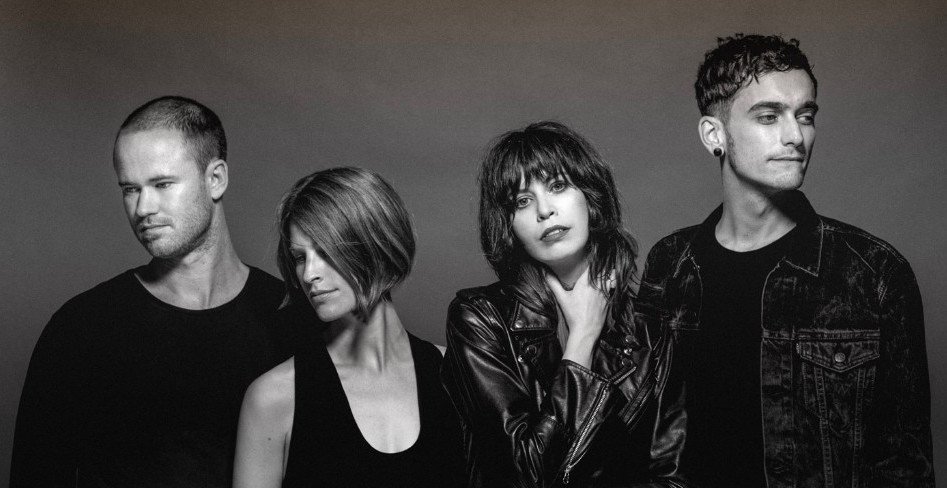 Hi Hayley. First, how did everything start?

Heither, the keyboarder, and I, have met each other since we were 7. We went to primary school together, and high school and we used to play just acoustic. That was in Baird Bay, which is a big town in Australia.

Then we both moved to Sydney, for university, and started a band with the guys : Sam and Nick. In our first show in Sydney university band camp we came second. We thought we wouldn’t make it, so it was good ! (laughs)

Just when from that, we started to ring and write and encountered our manager at that very first show actually. For a couple of years now, we’re still in union, working and then we eventually went on tour… Things happen progressively.

Do you compose all the songs by yourself?

We all write music together, and then I write the lyrics and the melody I guess … It depends, sometimes the lyrics come first, sometimes it’s music…
It’s changing every time. But yes, it’s a collaborative work.

In The Jezabels newest album we can hear more electronics sounds. Where do those inspirations come from?

It comes not so consciously. It came from Heather who liked to buy new things. When we started that, all she had was this crappy Yamaha piano that she had when she was a kid and then as we can get go in she just kept by more and more things. Basically she just plays around and then we go : « that sounds good! let’s make a song of it! ». It just came from her, buying all things and also I guess by listening a little more to electronic music…

Would you say that your style has evolved from your first to your last album?

I think we are quite influenced by the eighties, like new wave, some of gothic music. And I guess that leads you to synthetise a lot. And also pop music !
But, I think, it’s not so much a conscious choice but sometimes you decide to go more rock and roll or more electronics but it doesn’t feel like a choice … It just happens!
We definitely have changed, it’s impossible not to evolve, I guess (laughs).

Have you ever played in France?

Yes we’ve played in Paris a few times.
We nearly played Lille. We support the Depeche Mode in the UK, we were supposed to play Lille. But the show got cancelled because there was no heating.

Where would you like to be in ten years?

Still just playing music, singing …
It is very easy, these days for young westerners to become paralyzed by choice. I know a lot of friends who don’t know what they wanna do or changed their careers a lot. Me, I just wanna be a singer, that’s all I want to be, and I think I’m very lucky!

Were you born with music by your side or did it come later in your life?

It was always there … My dad was a musician. My mother used to play the piano, they both loved rock and roll. There were always guitars everywhere. I just sang in the shower all the time [laughs]
Rather early, I started writing songs.. It wasn’t a choice, I just did it!

Among all your songs, what’s your favourite one and why?

The new single: Pleasure Drive. I think it’s very different from the rest of the songs. It’s my favorite one because it represents a good time in my life and in the band’s one.
It’s about living in the moment. The album is very romantic, looking back and abstract but this song is just about enjoying life and I felt very liberated when I was writing it !

Would you say you are an optimistic person?

Oh yes ! I didn’t used to be and I think writing that song was like the signifier of becoming an optimistic person ! [laughs]

If we just have a look to different titles of your songs such as: Nobody Nowhere, Hurt Me, Deep Wide Ocean, Dark Storm… we could imagine that your music is dark and sinister, but when we listen to some of them, we don’t feel sad or depressed at all… Your music sounds more optimistic than the lyrics.

Partly it’s because when you make anything, you’ve got to have balance or contradictions.
So if you have optimistic music and one dimensional optimistic lyrics, people find it hard, too much happiness.
There’s a hope and sadness in, i think, all of that songs, it’s like a mix !

Yes, the keyboarder, Heather was diagnosed a cancer when we were writing our second album, in London. We were actually thinking we would stop at that time but she wanted to keep writing and just keep on normal life. And we’re keep going on, the most as we could.

That second album was like a therapy for us. It came to a point, she was told by the doctor that the cancer progressed to a more aggressive kind of cancer, it needed to be treated straight away, she had to stay in Sydney and do treatment for it, and then we had to cancel, sadly.

But, we are pretty optimistic that she’ll be fine, she’s very healthy on the other ways, she’s being treated very well by very good doctors. I’m sure she’ll be fine.

We did have to cancel everything, sadly, it just sucks. We’ve been a band for ten years now, we’ve travelled the world it’s an amazing life. Even if we’ll never tour again, it was great… But we will, I promise. Things are so easy when you have your health.

What are your latest music crushes?

I quite like a band named Fat White Family, and also the German band Von De Show.

What other bands have influenced your music?

There were a few bands when we were starting … Like Arcade Fire, Interpol, The Killers, American indie in general… Also The Cure, Depeche Mode, and for me: Royal Robinson…

David Bowie obviously ! You know I actually was devastated when he died. I didn’t know him but it was like someone of my family had died! We all cried. I feel like it’s cliché to say it now but I’ve always said that: it was, and it is still a massive influence.

Definitely live ! Studio is a lot of work, an enjoyable work of course but work. The pay-off is live.

Have you already recorded life sounds for songs?

We never loaded life recorded. It sounds simple, but every time we were trying to record life sounds, there was a lot of things going on at the same time and we couldn’t. I would like to do it one day but we would develop a sound which is impossible to play just with three musicians.

Have you some advices to give to all new bands starting to play music?

Listen to a lot of music but don’t try to create what’s happening now because it already happened. Have a style, develop yours!
Practice a lot and play live, as much as you can. And just keep going and ignore critics!

What is your favourite country to play live?

I like everywhere I’ve ever been ! (I’ve never been optimistic like that) [laughs]. Probably Germany, Scotland, Ireland where people seem to like our music the most. I like playing everywhere to be honest, but probably Germany would be the best crowd for us !

Which songs of The Jezabels have the greatest success when played live?

I don’t know … maybe Endless Summer ? I’m not sure, because I actually don’t follow that [laughs]. They also like Hurt Me.
But hopefully, they like the new albums. It’s nice when people like old songs but also “didn’t we write anything good since then” ? [laughs]

To what extent the new album is different from the others, except for the instrumental part?

Are you a plighted person?

It’s a funny thing, it is not very cool in music to be political these days. But I think, ultimately, that everything is political. I think there’s a stigma to the word feminism. But I mean gender equality.

I want a general equality, it’s not original, it’s an old idea, but these days more than ever we need to try to be more empathetic to people, to the other, in a way that makes sense. Whoever, refugees, women or someone of a different race …

And also I suppose I’m probably concerned with the environment… We need to shift towards responsibility rather than domination of people resources in general. We need to look at ourselves and ask ourselves what we can do, because it is a scary time. We probably have to work out some kind of peace between ourselves and not destroy the earth. It doesn’t have to be original; this is something I have learned.

When you are young and you have everything, you feel like you’ll never die, and you have privilege which is invisible to you, that’s when you think “cliché is a cliché”. But when you have experiences and a little bit of loss or when you’re struggling, you realize that clichés are true most of the time.

You should care for people, life’s hard, you should have empathy, all of these cheesy things are ultimately completely true.

I heard a story, recently and it really touched me. It was about this lady, this English mother. She’s always been very cold to her children. On her deathbed, she said to her daughter who was sitting next to her: “I was so mean, wasn’t I?” and she really regretted being mean. And I was thinking: what would I regret when I’m on my death bed? What are you thinking of when you actually are face to face with death?

We shouldn’t wait until this moment.

No we could think about it more. Because we’re potentially on humanity’s death bed. We must act to try to prevent all those regrets.

Thanks to you guys!