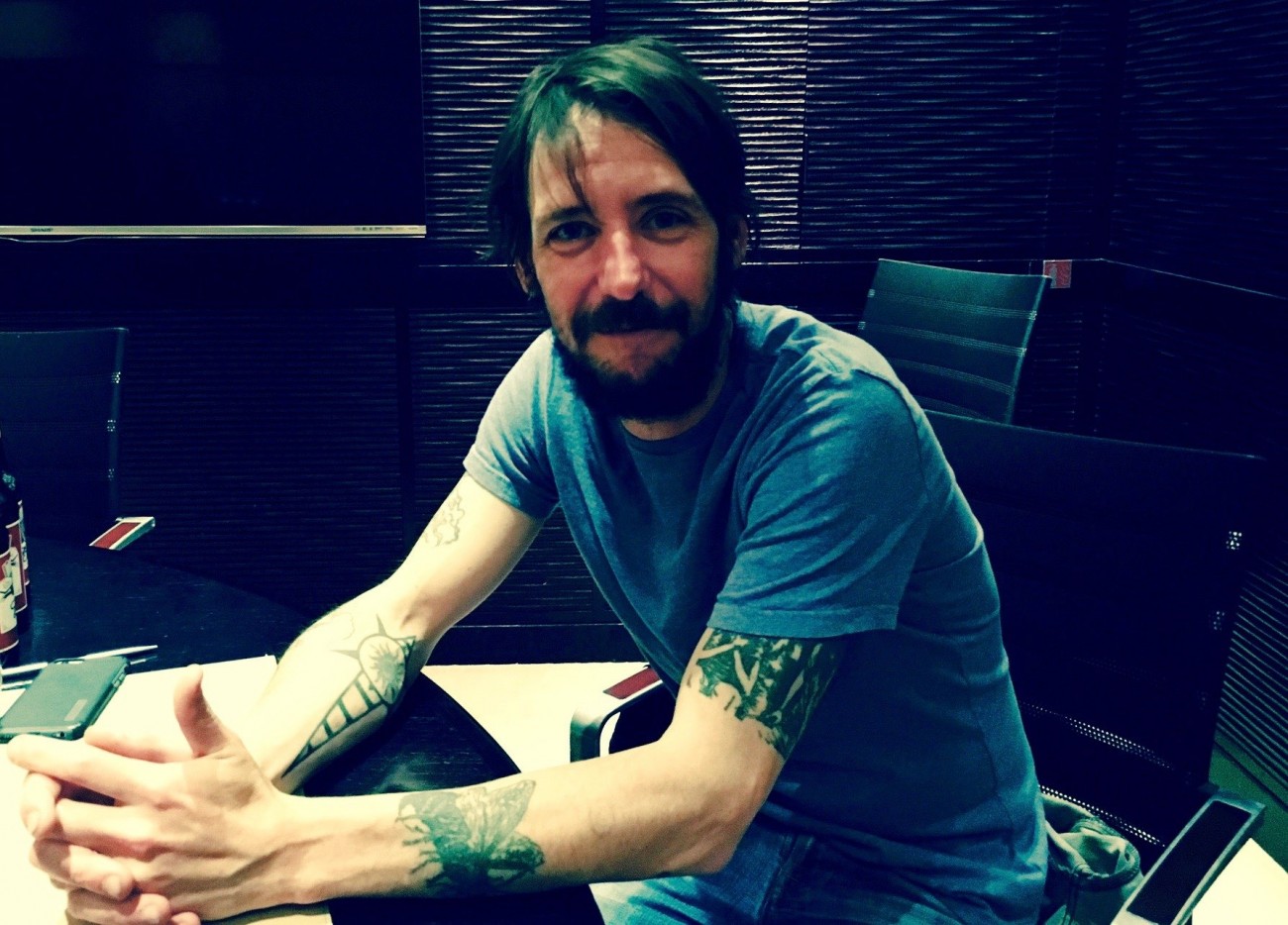 Ben Bridwell (Band of Horses leader) starts by telling us this is the final interview of his big promo tour, and that he’s so happy and relieved that he can stop talking about himself afterwards. Great start ! Hope we can stay the course.

I heard that your new album Why Are You OK is released in June. How do you feel?

I’m very excited, I’m very happy that it’s finally a real thing. I’ve been working on it forever, some of the songs for even longer, a couple lifetimes [laughs]. It’s a relief in the completion but also an excitement for what comes next.

Do you plan to tour?

Yeah, everywhere that people want us to go. We’ll start by festivals but we will come back to Europe for a headline tour then, and come to Paris for sure.

What is the band composition right now ? Because we saw it changed a lot since the beginning of Band of Horses…

We actually have been solidified, 5 persons. The new guy has been around for 5 years. We still do not refer to him by name, he is the « new guy » [laughs]. I’m kidding. We’ve been this family now for quite a long time.

Since Band of Horses first big success ten years ago, has there been an important change in instruments you play?

Different players along those years… Working with all those guys, they have succeeded in making a wider thing the songs that sounded crappy when I played them all by myself.

So you compose all the songs on your own?

Using what instrument? The guitar, the piano?

Anything. I’m equally bad at all all of them [laughs]. I use the guitar mostly but especially at home I have these things that I collect, like keyboard whereas… I’m abysmal at playing the piano. Some of them have unique textures, their own sounds I kind of just tumble along with, looking for some kind of melody and let it grow.

You start with the melody or the lyrics? What’s your secret man?

Sometimes it just starts with an instrument piece and I try to find a melody in there. And I say garbage, things that have no sense, just to find a rhythm, how to approach the singing part. Some other times… There is a song on the record that was a kind of exercise. I already had the lyrics theme before I knew what the song was. Because I just wanted to see if I could mess with people in the crowd, in their relationships… Ask them : « Are you really in love ? ». It is called Hag and I don’t know if I have achieved that goal.
There is no rule to anything.

What main themes are your songs about?

They change all the time, they hopefully reflect the current state of what is in my mind or what I want the songs to be about. Now they just come naturally, with a common thread that links them altogether.

A balancing act is important in the textures of the music. The most common balancing I wanted to deliver was the fact of travelling all the time in a rock group, with someone always asking me if I want a beer of something [laughs] and then going home with my wife and my 4 daughters. When you open the door, it’s like « get to work », I’m a servant. I get both sides of the coin there. It’s an important idea of the album.

Totally other subject, what is your favorite festival?

Good question… It’s difficult to give an absolute answer, there are so many different characteristics. Some of the best elements that make a festival that I would be excited about is when you’re allowed to go and watch other bands, and not be like restricted so much. You’re a bit confined. And when some festivals do that, bands cannot even talk to each other. You wanna get the fans vibe, you wanna be free you know, to get the same kind of experience that attendees are having.

Oh, another big thing : I love when there is a natural setting, not city-kinda-feeling festival. Playing in the woods is so great, you feel escapism, like playing on your own island. I love that feeling.

You seem to put a lot of you in your songs. Do you like to deliver everything of yourself when you compose?

Great question. There is a balancing act there also. I think I got kind of tripped upon, trying to mask some personal things. I tried to use clever word play or use metaphors to throw off. And I got to a point when I think I had done that too much, speaking in codes… I wanted to come back to the concept and its pure essence. I was getting confuse, I could not finish an idea because I was too busy trying to hide. I had to allow myself to tell a story.

It is an important lesson I got on this album that when I had writer’s block, when I got a bit lost in the process, I had to be more simple and honest. Just tell it and not fear the repercussions of people and other characters that play parts and could understand it too, like « oh, this is about me ». I worried about that too much.

What are the main characteristics that make Why Are You OK different from the previous ones ?

Interesting… A lot of the players are still the same, the game has changed but the players are still there. I have more kids now, 2 more between albums, 4 daughters [laughs]. There is a lot of living life that has changed, perspectives also. Family members are still there but there is a bit of suburban kicking back at real life, of this double life I’m having. Live like a king, live like a servant. The first song of the album, Casual Party, is about having to go to a shitty dinner party. Like I don’t have to do that in my other life, why do I have to do it now ? Damn it ! I don’t want to eat with these f*cking conservatives, people sharing all these view points. You feel f*cking miserable. But there is a balance there : you can’t always have what you want, every time.

How did you deal with the big success of the first album, of The Funeral ?

It just turned 10 years old, which is crazy.

For me too you know, I was a small kid then.

Yeah… Life’s almost over [laughs] No no. I remember feeling much more intense trying to make the second album, with all the success that we had, especially with The Funeral, focusing on how to still attract people to our music. I don’t have the formula to do all songs like The Funeral, it’s more like a video game to me, a fun challenge. There are pressures that definitely exist, like what people expect from new Band of Horses album. We don’t want to let anybody down, but I don’t think about this when I write. It doesn’t hang over my head when I create something new. It would influence it and I might be taking wrong ways, feel dishonest. There is some way it affects me, but maybe I don’t know it yet.

Why the name of the band, Band of Horses ? Do you feel that name is still adequate, relevant to describe your band today than it was ten, twelve years ago ?

Nice. It is actually. I named the band Horses initially.

Because of the Patti Smith album ?

No, I love it, John Cale produced it, but no. It was our sleeping outside, when I moved to Seattle from South Carolina, sleeping homeless. And I got a job in a cafe, I was sleeping in places where I could get robbed or murdered (in America you know). It was quite unsettling. And I was listening to that one song called Horses by Will Oldham.

This first lyrics of the song are « I’d be riding horses if they let me, sleep outside at night and not take fright ». And it was like a coming mantra when I was going to sleep at night, with my headphones. I took confort in that, and I wanted to remember that feeling when I started the band. I want to remind from how humble state this whole thing had started. The name Band of Horses is still relevant today. I don’t have to think about it everyday, because I’m not naturally boastful, I’m down-to-earth. It absolutely still plays a part in everything that we’re doing, because we’re very grateful about everything that happens to us, having a life in our favorite thing which is music.

We’re kind of fans of your label Sub Pop. Did you have the chance to collaborate/meet other artists of the label ? 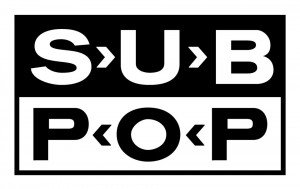 I started with my own label and I had a friend extremely talented. I was like « I’m gonna mess that up », so I passed it to Sub Pop [laughs]. I felt my job done. When I started Band of Horses, he (Iron & Wine) actually brought me to Sub Pop, which is funny because we both come from miserable towns in South Carolina, we could not be further away from Seattle.

But as far as I am working in the Sub Pop Records, I met other artists yes. One of them played the drums on the first Band of Horses album and we toured together. She actually sings as well on the new Band of Horses. You meet folks on festivals and stuff, but it’s not at all like office parties. There are people from all over the world.

So, not as much as you might think. But we all benefited from the vibe around Sub Pop, with The Shins, Iron & Wine. There’s kind of a home team we’re playing for.

Do you still listen to lots of music ?

Yes, a lot, always. I’m a voracious consumer, looking to new stuff, contemporary stuff and things I feel I haven’t connected to yet. You know I haven’t had my true Pink Floyd experience yet. I’m waiting for it, giving it some time.

Contemporary bands I listen to… Maybe because I was wrapped up in creating this new album, but I started listening to more hip hop, I wanted to stop listening to guitars, indie rock, white boy shit [laughs]. I needed to hear something different. I totally dove into hip hop : Big K.R.I.T.

And newer records : Rory, Kevin Gates, Vince Staples, Kendrick Lamar (especially Good Kid, M.A.A.D City, which was a huge record for us when we were making the album). It was enriching , spreading the limits we can have with guitars and rock’n’roll. This fresh stuff is great.

Do you have a favorite Beatles album ? And Bowie album ?

Wow. Tough one. For Bowie it’s simple, Hunky Dory, I still listen to it all the time, still so fresh. But I want the challenge of the Beatles album to chose… I guess it would have to be… I want to say Rubber Soul so bad. Just because Rubber Soul was a transition, from something stock and safe to taking rock’n’roll music in a whole new realm. For what that provided, I would have to go with Rubber Soul. Final answer.

Thanks to Lisa from Caroline International for making this interview happen

Why Are You OK by Band of Horses (Interscope, Caroline International) has been released since June 10th, 2016 (listen to it on Deezer) 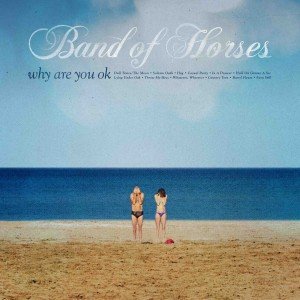