Home IndeflagIn English Interview – The one and only !!! (Chk Chk Chk) at Sziget 2016 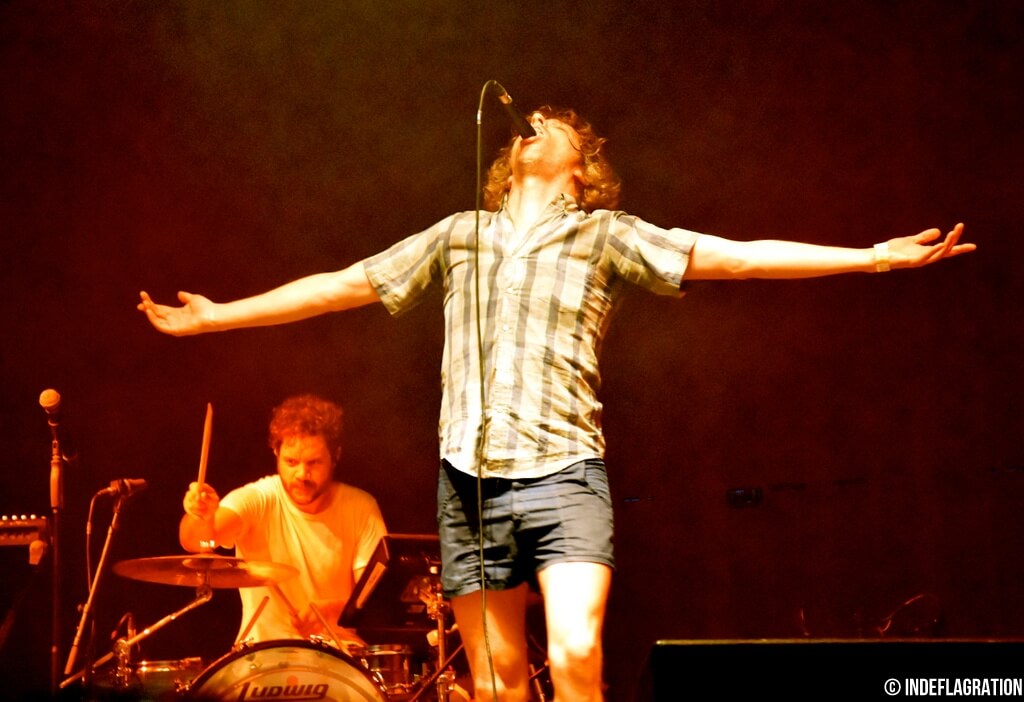 Hello Chk Chk Chk, how are we supposed to pronounce your name?

It’s supposed to be any three sounds of your choosing. Chk Chk Chk pst pst pst tit tit tit. So you can’t say it wrong. You just have to feel it.

How do you say it?

I say Chk Chk Chk, it’s just the easiest, it became what everyone called us, it’s fun.

Is it your first time here at Sziget Festival?

No I think it’s the third time we play at Sziget. It’s always a fun festival, and a good one. Everyone’s having a good time. There are usually some good bands I wanna see and I like the location.

Chk Chk Chk is considered as an amazing band on stage, doing amazing performances, but do you prefer studio or live?

Uh… I like them both. I think they are really different experiences. Live is more immediate you know, more exciting, more visceral. The studio is more a contemplative event. You are sculpting and creating something, which is really exciting too. I love being in studio and I love being on stage.

« Prince is probably my favorite »

How would you define your creation process?

We tried out as many different processes as possible, in order to get different sounds, different reactions. We don’t want every song to be the same. We have many different combinations: sometimes I’m working with Mario, sometimes I’m working with Raphael, sometimes the whole band works together… But we do a lot of jamming, and then kind of piece things together out of the jam. We record everything on the computer, then cut everything up, kind of move it around and place every piece in the songs. Then we start writing the songs on top of those jams. We do a lot of that.

We read you loved Prince and his funk music, what was his most inspirational song for you and for the band?

The best artists are the ones whose it’s the most difficult to name your favorite song by, you know. I have such strong personal connections with so many of Prince’s songs. I love them for so many different reasons but I usually say the Ballad of Dorothy Parker is my favorite.

If you had to choose one song for a tribute to Prince, which one would you choose?

We used to cover a song by him that was a bootleg song called Extralovable. That was the song I would do in tribute. We never released it but I think it’s out there on Youtube.

If you had to choose a decade of music history to define Chk Chk Chk, which one would it be?

It’s difficult! It’s difficult! I think we’ll really try to choose openly and freely. I grew up as a teenager in the 80s so there’s definitely a thing about their music that made a very strong impression on me. But the 70s funk and disco was very much what we were trying to do when we started. Then recently, everything that we talk about is kind of related to the 90s. There’s always a mirror effect in music, it’s about twenty years looking back always. So now, it seems like everyone is looking back at the 90s and it’s exciting now, whereas in 2003 it was boring. But now it seems like there is enough distance and it’s interesting again. So I guess we can say most of the influences that we’ve talked about in the last record and for the new record have been 90s.

Do you mean you are looking back at you own music from the 90s?

Well, I’ll tell you what, we are looking back at the music that we were stuck up about in the 90s. We loved Hip Hop and RNB, but we didn’t like dance and techno and house. In the 90s, we thought that we were kind of punk. In fact, one of my old friends from the 90s – who was a house guy – came to me and was like “you’re playing house music, I told you!”. It was very funny, I was like “yeah yeah” [laughs]

Is there something you haven’t done so far during these 20 years with your band, that you are ready to do right now?

I don’t know, it’s hard to say. We always want to do something new, something we haven’t done before. We’re always pushing that. We’ve never really seen a boundary like “oh we can’t do that” you know… Actually we were making a joke about this the other day. We were saying “we need to talk about the things we haven’t done and then do that on a record”. We were like “we haven’t written a 17 minute opus so we need to that”. So maybe we need to do that.

Where would you see Chk Chk Chk in ten years?

I really have no idea, just cause I try never to know ten years before. Ten years ago I couldn’t imagine that I would still be here doing this I guess. And ten years before that I’d never imagine either… So I don’t try to think about that. I don’t plan too many months ahead, ever…

What would be the best three Chk Chk Chk songs to listen to for someone who doesn’t know you?

I’d probably say Slyd, All U Writers or One Girl One Boy.

We kind of do O.K. in France. I think we’ve had our moments. I was in a cab in France and our song came on the radio. What else do you want? That was pretty cool. We always play France a lot, do a lot of gigs there. I consider it one of our ‘good’ countries. Paris gigs are always part of our best shows. We just played headlines on Saturday night at Calvi On The Rocks in Corsica. It was pretty amazing.

I think we are kind of an underground group everywhere, it’s like we’re not really ‘pop’ anywhere. Our biggest country is probably Spain…

What is your latest music crush?

Lately I’ve been listening to a lot of Hip Hop: Kodak Black, Lil Bibby, Lil Boosie… I always stay and pay attention to Hip Hop. That music changes a lot, all the old guys are gone and the way they rap beats now is completely different than what it was ten years ago. It has almost changed faster than all the other styles of music have. I’ve always found that kind of fascinating. Sometimes I need to catch up, like “what is it really rapping about?”. They usually rap about the same things but I need to readjust.

Do you have a Hip Hop band you would like to collaborate with?

I don’t know what would be the right mix with Chk Chk Chk… Because it’s always funny to say “oh I want to collaborate with this person”. But it is so different when you are in the studio with someone. It becomes more about how your egos work together. There are so many artists that I love that I would never have wanted to work with. Prince for example. He does not want to work with me, he does want to work with him. I don’t know!