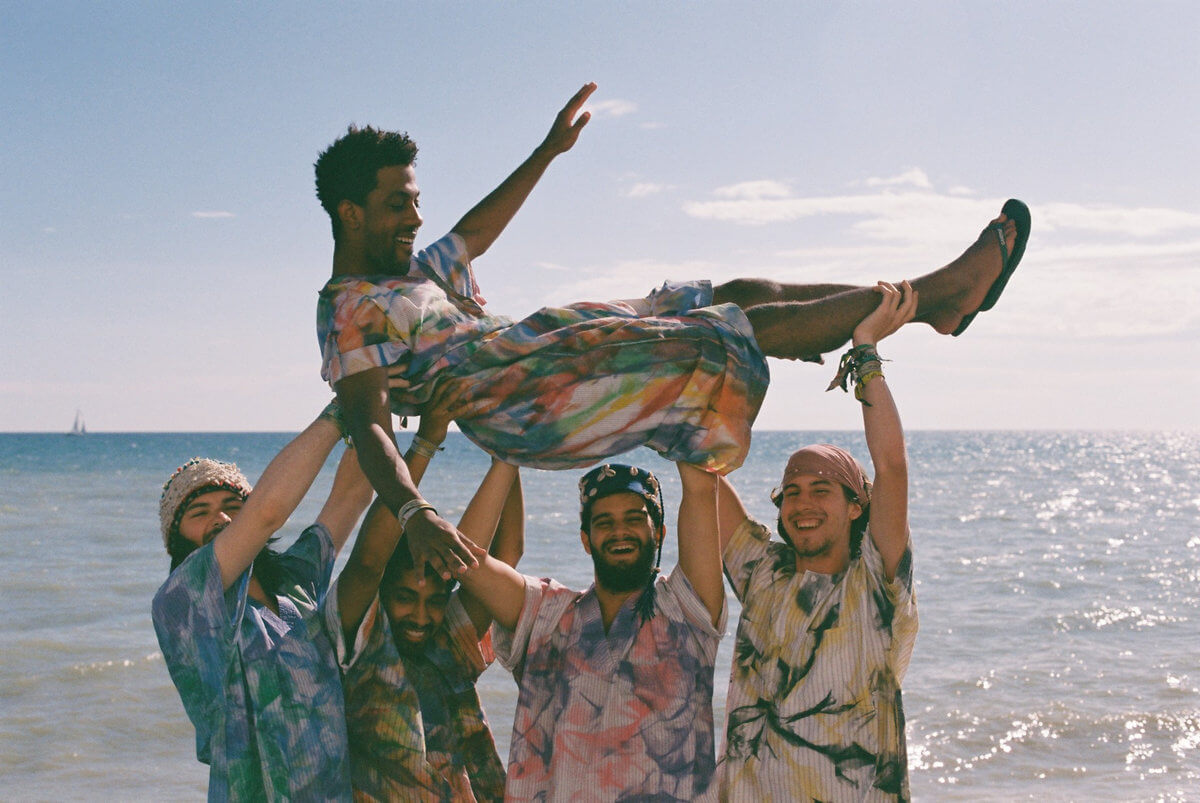 Hi Kamal. Tell us, where do each of Flamingods’ members come from?

We are pretty multicultural band. I am half-Turkish and half-Bahraini. Some of our members are half-Jamaican, half Indian, someone is from Wales… Together, we try to do something newer than just following the more common path.

When did you start playing together? It seems to be an unusual story. Everything began from a jam at a festival?

It was kind of an organic thing. It started from my solo project as I grew up with people from the band. We were jamming at ATP Festival in the UK, a big jam. Many strangers joined us, forming a communal jam which gave birth to great melodies. And then, we knew what we wanted to do. It was a good jumpstart.

How do you compose music then?

It is different for every song, we use different methods. A member will come with an idea or a melody and then we will develop it. We did not have the luxury to jam together because we lived in different places. We had to send ourselves simple ideas and work on them apart from each other.

The 2nd album is coming out soon [Majesty has been released since]. It symbolizes us finally all living together. We will finally do music full time. Before committing entirely to music, I worked in an independent magazine, a shop, a studio… We went back and forth between countries. Just recently, we finally decided to give it a serious go.

What is the story of Majesty?

At time I was reading a lot of travel literature from the 19th century and stories about explorers, discovering the cultures and being mind blown. It was really inspiring, a sort of cultural shock. It definitely started the idea of the record. Majesty basically tells the story of one person trying to discover all the ups and downs along the way.

What is your favorite tune of the Majesty? The most accomplished?

It is different for everybody in the band. For me it is Anya.

This album you know… It was the first time we invited people to read our music and play it. It will always feel different for me. 50 instruments, the whole album as a journey.

On side A, the beginning of the journey, with joyous aspects. On side B, reality comes back. Not all things are great anymore. The character goes through the darker paths of aventure. And the last track shows hope, rejoice. We imagined the whole album as a movie, with a continued narrative, a hidden meaning behind the album. Maybe you will find it out?

Do you think you’ll always plan your albums as a whole, concept album ?

I don’t know. It depends on what we get inspired by.

“I don’t think everything we do is intentional”

Who inspire you in contemporary music ?

We have so many talented friends we like: Boredoms, Animal Collective… A lot of old music as well. All of them form a great mixture.

Was psych-rock an evidence for you ? In the band, do you have the same tastes or totally different influences ?

There is a lot of different influences. For example, Craig (Doporto) grew up in metal. That is why he plays heavier in live.

We are trying to elevate the music, to create a whole different experience that would mix all of us. We all like exotic, psychedelic music from all over the world. We are also inspired by the music of the Sixties and the methods of musicians back then: taking traditional instruments and mixing them with Western instruments.

“At the end, it explodes into something else, something that lasts forever”

What is your favorite Beatles album ? Between Rubber Soul, Revolver and Sgt. Pepper I suppose ?

I grew up my whole life not liking the Beatles. A few years ago, it finally clicked. F*ck it is amazing. In particular the George Harrison’s written song on Sgt Pepper’s [Within You Without You].

The type of percussions and strings you use are quite unusual in psychedelic music : where do these choices come from ?

They come from the idea that we are never trying to go in one single idea. We are trying to do the opposite of that. People will like traditional psychedelic rock. It bores us. We feel it much more exciting to introduce exotic influences and mix it with psychedelic music.

Is this permanent balance between acoustic and electronic music intentional ?

I don’t think everything we do is intentional. It is organic because we have been messing around in search for instruments and ideas. Maybe it is a keyboard. It is more about the way we want sounds to sound like.

When we play live, we change the songs completely. We go in crazy places with songs. Usually, we keep it the same song and at the end of the song we explode into something else, something that lasts forever.