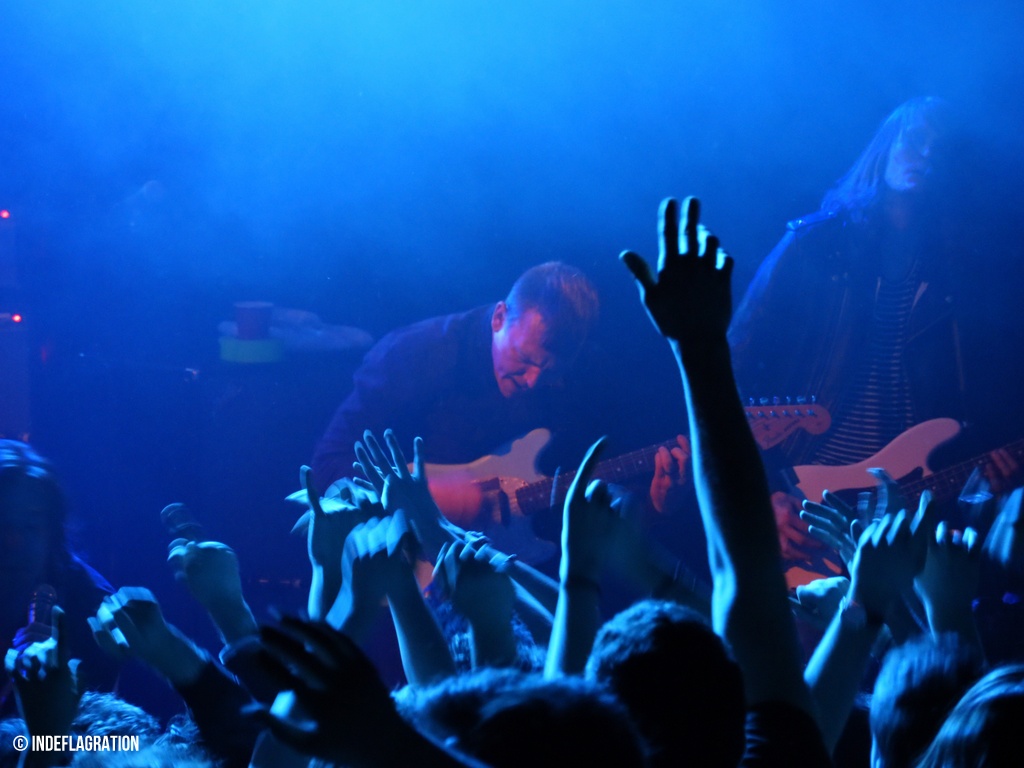 Hi Brad, how do you feel? Not too jetlag?

I fell asleep at like… 7:30 in the morning. I was just there switching channels like “fuuuuck”. I’m better after a lot of teas.

You must know that your song Ain’t No Rest For Wicked was used in an epic video game called Borderlands… Have you already played to it?

Oh yeah. That was the first of their series of that game, you know. We had no idea it was going to work out that way. They just kind of pitched the idea of a video for the intro of game, and we kind of tried. They liked the track so we were like “ok, cool, use it!”. And it turned out that it became a big stepping stone for the band. I am glad we did it.

At that period, in 2008, you were supporting The Pigeon Planes on tour. Are you still in contact and aren’t they pissed off that you overpassed them in popularity?

Hahaha. I don’t know, I haven’t seen them in a long time. I did run into one of their guitar players at Reading Festival. He is a super nice guy. We hanged out with him a little bit.

Do you have favorite festivals you played at (one in Europe, one in the US)?

Rock en Seine is amazing. That is one of our favorite in Europe. Reading in Leeds. In the States we really love Lollapalooza.

For festivals yes! But as far as we play for crowds, we are happy. We have played in front of huge crowds. In small theaters or rooms, it’s more intimate and the energy is just as strong for different reasons. I like to alternate between them.

Do you prefer live or studio?

Same thing! During live shows, you’re physically there connecting with people. In the studio, you are kind of expressing your thoughts and your emotions through music. And it is exciting because A. it’s similar to a relief to yourself and B. you know you have the opportunity to connect with people through that music.

Dan Auerbach from The Black Keys produced your latest album Tell Me I’m Pretty. How did it happen? Did you ask him to? Is he a friend of yours?

Basically we did like three tours with The Black Keys over five years. So we just became friends, with Dan and Pat [Patrick Carney, the drummer]. They are both great guys.

The collaboration just came through conversations we had on tour, talking about music. We were sharing our inspirations on that record with Dan, telling our different thoughts and he was like “you should come up and play some of these songs to me, I’d love to hear ’em“. Matt and I just let him listen to pieces that we had at the time, and he reacted “Ah, I’m gonna produce this record“.

Did Dan Auerbach put a lot of him in this record ?

I think he puts himself into everything that he does. As far as giving it all, very passionate. The songwriting, we had done a lot. We already had complete songs. I think Dan was important in hearing the strongest parts of those songs and kind of stripping back the unneeded, unnecessary stuff that were covering those tracks. I think it is one of the things he does very well.

If you look at music as a sense of timeless songs or timeless music, every part is very intentionally made. If you listen to The Beatles’ tracks – I’m not comparing to The Beatles – but they are the ultimate band to me, and they were the best at doing this. But maybe one little guitar line comes in the song and never comes back. It is so intentional, it was meant for that moment to express a certain thing. Everything has its place within, it is not just piled in to make this ‘great’ track. Everything has a purpose. Because at the end of the day, the only thing you have to play out is the structure of the song. It makes sure that the melody is great. Everything else you put into that is to magnify it a little bit. But you don’t throw anything on it or you bury it.

Dan was very good at stripping back the unnecessary stuff that would bury some other stronger parts on the record.

Tell Me I’m Pretty, it sounds more psychedelic and a little less rough than your other records. Was it intentional, something you were seeking at doing?

I don’t think we were seeking at doing something psychedelic. We just wanted to experiment with sounds. While you start experimenting with sound and you get out there a little bit, away from the norm, I think people will see that as psychedelic.

We did keep it very organic, in the moment. A lot of Matt vocals are what people call scratch vocals, in just like one take. It was maybe not the most technically perfect but the vibe was perfect. That’s another thing that Dan really can hear. There were many times we were like “oh, we can do it better“, and he was like “no no no, it’s cool“.

Do you define yourself a style of music or you don’t like to put boundaries?

I think with our band, it’s something we’ve always rolled against, defining our music as a certain… whatever. ‘Cause I think people need music to reflect themselves as person. We all have plenty different personalities and we have different shades of ourselves. Your music needs to reflect that. If you looked at yourself five years in the past, you would find many differences with yourself now. Cause you are consistently growing and changing, learning… You change from all those differences. The core of you is still you, you are not a completely different person, but a better version of yourself.

Do you have favorite songs on Tell Me I’m Pretty?

And then Punching Bags… I like a lot of them yes, we do music that we love, you know! But if I had to pick just one song, it would be Cry Baby.

You were talking about The Beatles. Was Lennon a great inspiration for you, especially as a rhythm guitarist?

Lennon is my favorite songwriter of all times. He spoke his mind. Paul McCartney is just as great, but it is different. For me, McCartney was a great storyteller, kind of the same as Bob Dylan. But I think John Lennon was just like talking to you in a conversation. That’s why I always connected with him. If there was one artist that was very similar in the way that he spoke through his songs was maybe Kurt Cobain.

[Someone gets in to bring Brad Shultz another cup of tea]

You love Lennon and tea. Maybe I missed something and you’re actually English!

[Coming back to the previous conversation] There are other people that you connect with, for other reasons. I am a big fan of Iggy Pop… His new band with Josh Homme is the coolest new band ever. When I heard that, I was like “WOW“, thought it was really meant to be.

I say something about Bowie…

Man, this year has just been a fucked up year for music, it is crazy. Lemmy, BB King, David Bowie, the guy from Earth Wind and Fire. It is just crazy. But you know, at that period, those old cats are getting older. It is part of life. It sucks but it is the way it is.

Okay, so last strange and coming out from nowhere question: do you have preferences between Trump, Sanders, Clinton for American presidency?

We generally just stay out of political stuff. But I think it is a big deal. I think Trump is a hype machine. He is better off being a reality TV show personality, not a president. That is all I will say about that. I would not vote for him, I’ll just say it that way [laughs].

And right now, what is it?

Brad insisted in making us listen to the entire song while climbing down the stairs of the hotel. We suppose it is the best way to end this interview…

Album – If I Should Go Before You de City and Colour